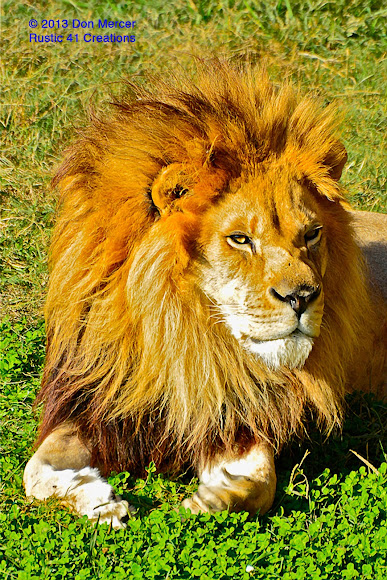 This was a beautiful specimen that is indicative of a well-treated and well-fed animal maintained by a professional zoo, as is the case with the Virginia Zoo at Norfolk. This lion's mane was clean, as if it had been brushed. This was a far different sight when compared to a lion in the Okavango Delta, as seen in May 2001 on a photo safari.

Sub-Saharan Africa and only a sparse population in Gir National Park in India (Asia). This specimen was an African lion.

While I enjoy visiting a zoo, such as the Virginia Zoo at Norfolk, I always feels pangs of remorse for the animals that are in captivity and not allowed to run free. That said, it should be noted that the life expectancy of a lion in the wild is about ten to fourteen years, as opposed to more than twenty years at times in captivity. Males in the wild seldom live longer than ten years due to the intense fighting that occurs regularly between lions of that gender. I have found it usually difficult to obtain images of reasonable quality at zoos because of the structures and fences required to house such animals safely. The design of this lion's enclosure, as well as a number of others at this zoo, provided clear vantage points such that photography could be maximized. The use of a 300mm lens, albeit handheld, served nicely due to the excellent soft light occurring in the afternoon. This male was doing what male lions do best, stretch out and rest in the afternoon sun. However, for about three minutes it raised up and assumed a beautiful pose as if it was being paid to model.