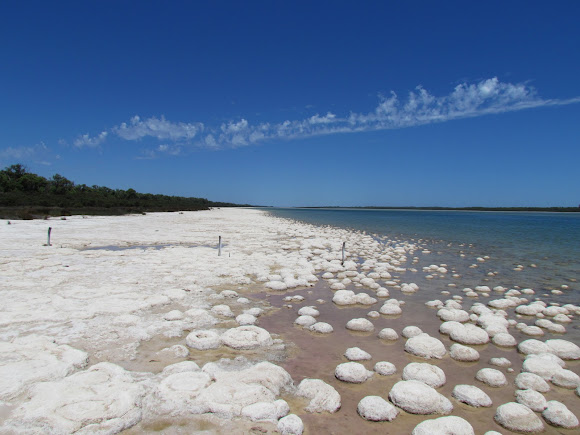 Thrombolites are rounded structures formed in shallow water by the trapping, binding, and cementation of calcium carbonate and other substances by colonies of microorganisms, especially cyanobacteria (blue-green algae). The organisms that make up the thrombolites are considered close relatives to those that lived billions of years ago. Scientists believe they are the earliest form of life on earth, dating back 3500 million years, and the origins of oxygen in the atmosphere. These relics are mostly extinct and exist only as fossils - living examples can still be found growing in just a handful of places in the world, one of which is Lake Clifton. Thrombolites are formed when these organisms die and leave calcium carbonate skeletons behind, forming a base for the next generation to live. This process continues, forming a white skeletal mound.

How very cool! I've never heard of these before!

I would appreciate it if you would add a reference link. I searched all over for an appropriate one. Unless you'd like to use wikipedia, this is the best that I found. http://www.environment.gov.au/biodiversi...
This would belong in the 3rd spot for reference links.

Cool.. I have to put it on my list for next year! I am planning another trip to South WA in September next year.

100km South of Perth, near mandurah. In the picture they are the white rounded structures near the water. Dead formations can be seen further up the bank

Thanks StevenSpragg.. Where are the thrombolites?

Similar but not the same, thrombolites are formed in a different way to stromatolites.

Are these the same http://www.projectnoah.org/spottings/631...

This is TOO cool, I've never heard of these... Thanks for sharing the photo, and the excellently informative description. :)