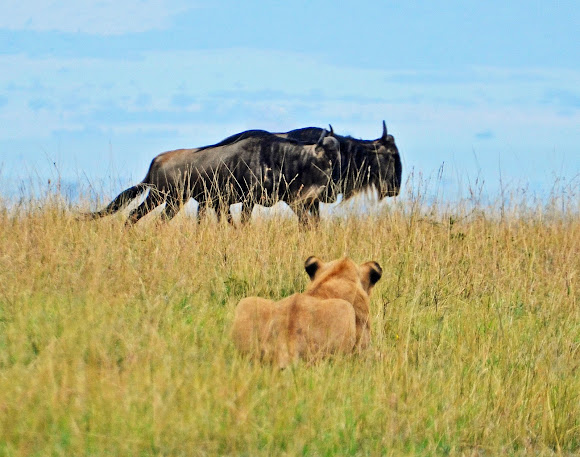 A young male lion from a pride of four spotted in high grass stalking a line of blue wildebeest. On the 3rd shot one of the lions stands up and all the wildebeest freeze in one spot. 4th shot shows that the lions’ stomachs are distended and that they have already eaten well on that day. The wildebeest are safe… for now.

Savanna grasslands with scattered acacia trees for shade. Most African lions are now found in Eastern and Southern Africa. They are a vulnerable species and their numbers are unfortunately still decreasing, with estimated 30–50% decline over the last two decades. Spotted here in the Masai Mara, one of the best places to watch wild African lions.

Blue Wildebeest (Connochaetes taurinus) are a lion’s favourite prey in the Masai Mara. At the time these shots were taken lions were eating every day in the Mara, as recent rain resulted in large numbers of wildebeests still hanging around. The group was made of 4 male lions of various ages, who may have recently separated from their original pride. If you find yourself in the Northern Mara Conservancy and nearby parts of the Mara, you can submit your lion sightings to The Mara Predator Project (http://livingwithlions.org/mara/). The project's website provides an ID guide to IDying individual lions, to help researchers track prides (unfortunately this spotting was in a different part of the Mara). Find out about it in the following BBC article on nature apps, where Project Noah is also discussed:

These are such great shots.

This would be a good mission to add them to:
http://www.projectnoah.org/missions/8463...

I think you should post it but put the graphic photos towards the end of the sequence. Animals eating are a part of life. Any photographer or biologist will tell you the importance of observing animals without interference and that feeding is and always has been a natural part of life!

Difficult! To me it sounds very interesting, but as you mentioned in the text, there will probably be some people that would feel offended. Perhaps PN should develop a way for those spottings to be published but not seen unless you want to see them.

Feeding and hunting habits are an important part of wildlife and science. I think that many of us have similar photos. I posted one picture of a prey that can be perceived as quite macabre, and I faded down the red in that photo. But this is not the best solution of the matter either...

Thanks Tina and Arya! We observed the scene for about 15 min but the lions didn't go through with the hunt... they had already eaten on that day. There's certainly safety in numbers for the wildebeasts... I have another spotting I never posted where lions were successful, complete with video footage. Can't quite decide whether I should post it as it's quite graphic... But it's nature and it ain't always pretty.

Daniele, very cool series! From the looks of it, did the lions end up not going through with the hunt? Looks like the "gunus" formed a intimidating defensive line!

What a fantastic experience to have seen this Daniele!

Thank you Sachin and Saarbrigger!

I had missed this marvelous series,

Thanks, I will inform her. Will wait for the one with the kill, and will inform her, she will be keen to see them (she has never seen such photos). I take her birding because she likes to see them, no force :)

Satyen you can tell her I thought he was, before I realized he was not hungry. They were just watching them like cows watch trains go by! You can also tell her that I did click one with the kill (complete with video footage; needs editing); still to come. Nice comment about the last pic and nice to know you take her birding!

Yes Daniele she loved it, she asked me if the lion was going to attack the bull (wildeebeast) in the first photo and if you have clicked any with the kill? She also saw the last pic and told me that they were kissing. She has started taking active interest in birding too. She joins me if I'm going on a small drive for birds, infact the Coppersmith Barbet in my collection was spotted by her.

Thank you Satyen! I hope your younger one liked this one of he/she saw it.

Extra pic added to this spotting.

Thanks for your comment Coral! I was only a few yards away, but safely inside a Land Cruiser (the vehicle is actually fully open though...). There was plenty of game for the lions at the time and they were basically not interested. Still, stepping out of the vehicle was out of question!

Amazing! How did you get so close to the action? Even with major zoom you had to be close!