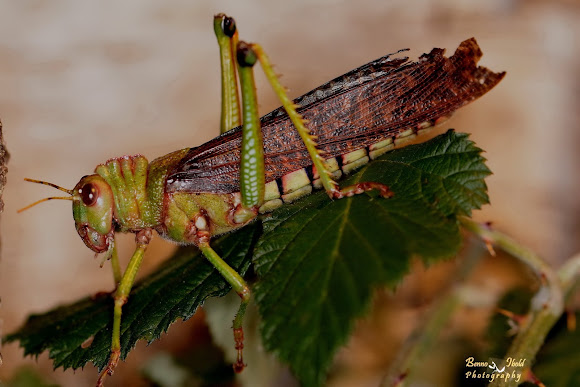 The females of the giant grasshopper reach a length up to 90 mm ​​and a wing length of 100 mm. Males remain slightly smaller with 70 mm and have a wing length of 90 mm. The ground color varies from olive green and brown. The wings are mostly brown. Are characteristic of the segmented neck shield , which has a green color. The header area above the eyes is reddish , like the tip of the snout with the mouth parts . The sensors are in proportion to the overall size quite small. The giant grasshopper and their larvae feed on leaves of various berries. Your favorite food are the leaves of the bramble . Giant grasshoppers reach maturity after about four to five weeks. The female lays on her abdomen egg packets into the ground . The egg packages comprising between 50 and 100 eggs which have an oval shape. After about 30 days the eggs hatch the young animals . The young molt every four to five days. In total there will be five molts . After the fifth and last moult the giant locusts are fully grown and sexually mature.

The natural range extends over northern South America. Especially in tropical areas of French Guiana and Suriname it is widespread . She lives on the ground or in low shrubs .