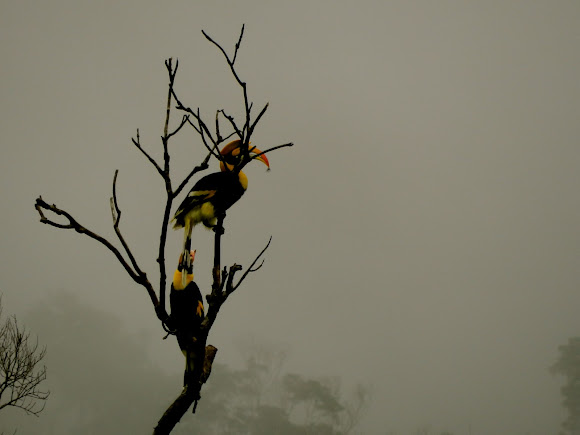 Great Pied Hornbill is one of the large members of the hornbill family. The hornbill weighs up to 4Kg and have a length up to 120 cm. Great Indian hornbills are usually seen in small parties with larger groups sometimes aggregating at fruit trees. In the wild great hornbill usually feeds on fruits and also occasionally prey on small mammals, reptiles and birds.

It was such a delightful feeling for me to spot a pair of Great Indian Hornbills on a chilling rainy day in one of the most remote areas in the Eastern tip of India. Only in Namdapha National Park all the 5 species of Hornbills are seen; namely Great Pied Hornbill, Rufous necked hornbill, Wreathed hornbill, White throated brown hornbill and also Oriented Pied Hornbill.