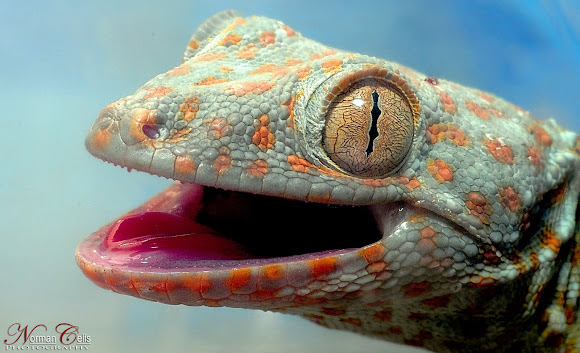 The Tokay Gecko is the second largest Gecko species, attaining lengths of about 30–40 cm (11–15 inches) for males, and 20–30 cm (7–11 inches) for females, with weights of only 150–300g (5–10 oz). They are distinctive in appearance, with a bluish or grayish body, sporting spots ranging from light yellow to bright red. The male is more brightly colored than the female. They have large eyes with a vertical slit pupil. Eyes are brown to greenish brown and can be orange or yellow.

The Tokay Gecko or Toko is quickly becoming a threatened species in The Philippines because of indiscriminate hunting. Collecting, transporting and trading geckos without a license can be punishable by up to twelve years in jail and a fine of up to 1,000,000 pesos under Republic Act 9147 in addition to other applicable international laws. However, the trade runs unchecked due to the sheer number of illegal traders and reports of lucrative deals. Chinese buyers and other foreign nationals are rumored to pay thousands of dollars for large specimens, reportedly because of their alleged medicinal value or as commodities in the illegal wildlife trade. The Philippine government has issued a warning against using geckos to treat AIDS and impotence, saying the folkloric practice in parts of Asia may put patients at risk.

The Tokay is also considered the "pitbull" of the gecko world due to the fact that when they bite, they often won't let go for a few minutes or even up to an hour or more, and it is very difficult to remove without causing harm to the gecko.

What a great photo!

Norman, this spotting has been chosen to illustrate the blog today on how the trade in animal products is impacting many species. http://blog.projectnoah.org/post/4430052...

Oh, a Tokay!
I love these when they are saying Tokay!

you can send me an email at deftoneschicheng@yahoo.com.ph

Hi,I am an editor from Digital Camera Magazine Chinese in Beijing (http://www.dcmagcn.com/). Our magazine introduce one photographer and his photos about wild animals every issue. We are interested in your photos about Tokay Gecko. May I have your email address to introduce more details about our magazine? Thank you!

hoping this pic could make it on 2011 Best Wildlife Photo =)) Happy New Year Everyone and more power to Project Noah! God Bless.

Gecko in the Philippines were hunted because it was used and traded for Traditional Medical purposes. It's price amounted to 1M per kilo as far as I can remember. ALthough no such research proves that it does and the government banned its trade people still continue to hunt them...

Norman, I noticed all of your spottings are all marked with the same lat/long coordinates. We would love to see a more accurate geocode of where you spotted them. I'm sure not all of your photos were taken in the exact same spot :)

So beautiful, such vibrant colors and intense eyes. Thank you for sharing this beautiful pic!!

"Tokay geckos have a 'third eye' called a pineal body on the top of their head, which is believed to help coordinate their activity with light conditions."

thanks Sean and Doina...