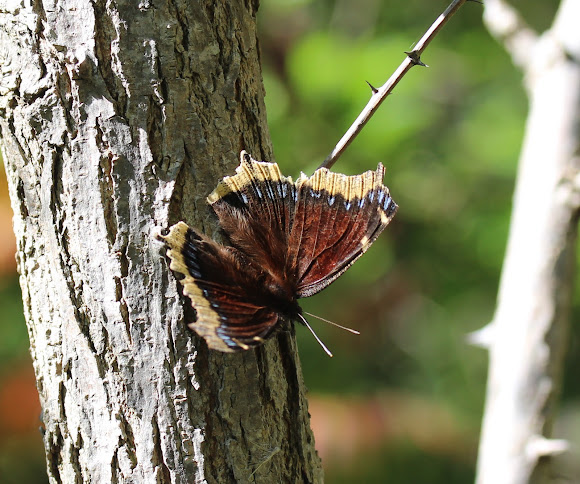 Nymphalis antiopa has a wingspan of 62–75 mm. The upper side of the butterfly is colored in a very dark red, with a bright, yellowish border around the wings. There is a darker band with bright blue spots between the border and the dark red inner side. Sexes are similar, although the females are slightly larger.

Throughout its range, this species is generally considered a butterfly of woodlands, though it may occasionally be found in drier areas such as the deserts of western North America. During migration, they may be found in almost any habitat.

I spotted this on a trail behind the upper parking lot at Fireman's Park. I spotted a mourning cloak along this same trail about 6 weeks ago. I don't like posting the same organism from the same place but this was a different time and from some of the comments I received on the first spotting, I wanted to show that this species appears to be slightly common in the area. http://www.projectnoah.org/spottings/698...