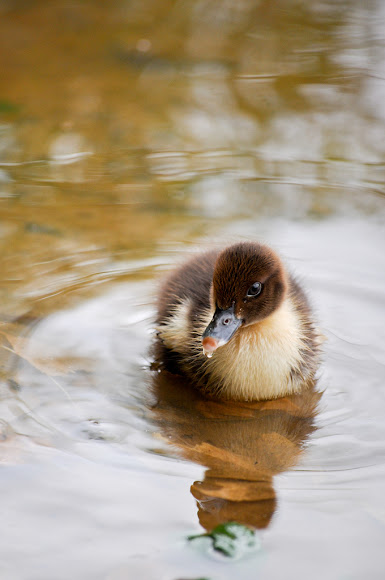 Muscovy ducks are brownish-black in coloration, with iridescent green and purple dorsal plumage and white wing patches. The legs and feet are grayish-black and the iris is yellowish-brown. Males and females are similar in appearance, but males are nearly twice as large as females. In addition, males have a patch of bare black skin surrounded by pinkish-red caruncles (fleshy outgrowths) which extends from the back of the eye to the bill. Although relatively silent, the male produces a low hissing sound and the female has a short, weak "quack."

The muscovy duck is found in all parts of the world in a domesticated state. Its chief breeding range in the wild includes Central America and northern South America. In North America, muscovies are found locally in Mexico and a small population inhabits southern Texas at the extreme northern edge of its range.

At our duck pond

Too cute. Mine are seven weeks old now, and have legs like Velociraptors. Out of the fourteen, I've kept two blue girls and one bronze boy. And there's still one black pied drake that I'm tying to find a home for. It's spring here, so I'm cutting back on the feed and forcing them to forage (poor dears).

Thank you, Atul and LTW!!

What a lovely picture! Great notes too.