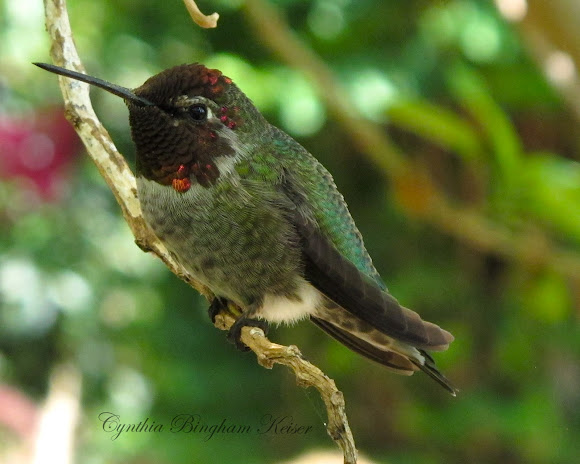 Gorgeous young green, brown and red hummingbird. The colors change depending on the lighting as shown in this series. The hummingbird is the only known bird to be able to fly backwards. This bird took a micro nap while I shot (fourth image)! The last image is the expression when the mom came over and scolded it for letting me get so close :)

Resting on Angel's Trumpet and Cootamunda Wattle trees that are near Bottlebrush, Cape Honeysuckle and Bird of Paradise in which it drinks.

This species qualifies for Wildlife with Special Adaptations with its sonation during display. "The outer tail-feathers of male Anna's Hummingbird (Calypte anna) vibrate during display dives and produce a loud chirp. When courting, the male ascends some 30m before diving over an interested female at high speed and producing a high-pitched sound. Experiments showed that the birds could not make the sound when missing their outer tail-feathers, and that those same feathers could produce the dive-sound in a wind tunnel. The bird can sing at the same frequency as the tail-feather chirp, but its weak syrinx is not capable of the same volume. " - Wikipedia

Thank you! It's my favorite hummingbird too :)

Your pics are beautiful and unique!