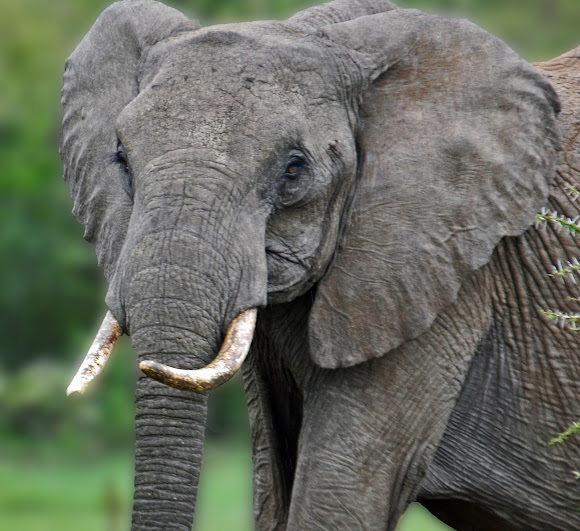 African elephants are the largest living terrestrial animals, and are highly socialized and intelligent. This elephant was part of a large herd encountered in the Masai Mara area. Find out more about the herd in the extra shots and notes.

Savanna with adequate quantities of food (grass and browse) and water. Distribution: Eastern and Southern Africa.

This herd of about 20 was made of several females together with their young of various ages. Well hidden and protected at the center of the herd was the youngest calf (4th shot); its tusks not showing externally yet indicates that it is still suckling its mother. A large adult male, a “one-tusker”, was ending the convoy (5th shot). Mature males usually live in bachelor herds and join a female herd during the mating season. Elephants favour one tusk over the other, shortening it from constant wear. This may have led to premature loss for that guy. The group was found not the Masai Mara reserve proper but in the Siana Conservancy, about 20 km outside the Mara (read more about this conservancy at http://www.projectnoah.org/spottings/729... ). The lack or destruction of migration corridors between these areas and the Masai Mara reserve can create conflicts with villagers due damage to crops and the danger of stampede, and it can happen that entire groups have to be moved back to the reserve.

Thanks Mona and Jolly. Having the chance of coming across these incredible and majestic creatures you do feel very insignificant....

Hi Daniele,
Could you add this African Elephant to the Endangered species of the World mission?
http://www.projectnoah.org/missions/1399...
Thanks!
Lovely series!!!

Thank you Manolis, Sean, Karen, Emma and Harsha! And thanks for your story Karen...coming across large herds of elephants is an awesome experience.

Great pics! We had a herd pass within 100 yards of us while we were camping by a river in Eastern Cape & never heard a thing because they move so quietly! We found all their tracks the next morning.

Sorry, I was not aware of the water shortage. Last when I had seen an Elephant it was in dry season in Ranthambore National Park and there was some noise as it was walking on dry leaves.

The grass was actually dry'and the ground quite hard. As I'm sure you're aware there has been some quite severe water shortage in the horn of Africa recently (Masai Mara hasn't been that badly affected). They just go very gently. I'm sure it's a different matter when they run!

Welcome. I have never seen a herd of Elephants, only one here and there. Footsteps are not heard maybe due to the wet grass. Maybe we could here them on dry leaves?

Thanks Satyen! The young calves look so vulnerable amongst the adults. Coming across these large herds of elephants was one of the most memorable experience for me there. Amazingly you hardly hear their footsteps: they walk very softly.

Amazing info, the baby in the fourth shot is cute.

Extra shots added to this spotting.