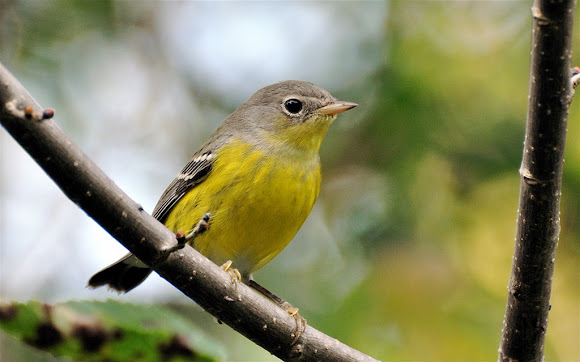 The magnolia warbler can be distinguished by its coloration. The breeding males often have white, gray, and black backs with yellow on the sides; yellow and black-speckled stomachs; white, gray, and black foreheads and beaks; distinct black tails with white stripes on the underside; and defined white patches on their wings, called wing bars. Breeding females usually have the same type of coloration as the males, except that their colors are much duller. Immature warblers also resemble the same dull coloration of the females. The warbler regularly measures a little less than 15 centimeters. For the males, their yellow and black-speckled stomachs help one to tell them apart from other similar birds when in pictures, like the Prairie warbler and Kirtland’s warbler. However, in their breeding habitat, it is easy to know a magnolia warbler from other similar-looking birds because others such as the prairie warbler and Kirtland’s warbler are only found in eastern North America or Michigan and southern Ontario, respectively, in comparison with its northern Canadian habitat.