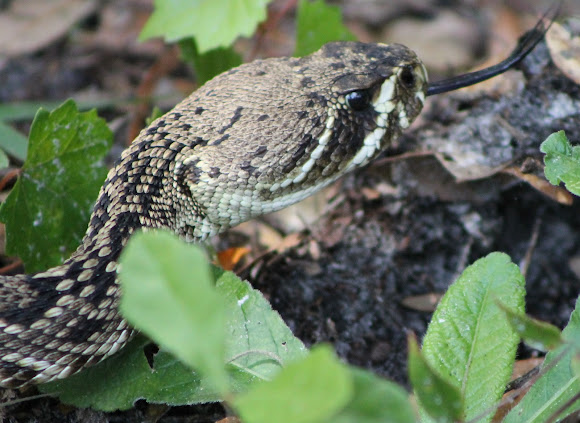 The eastern diamondback rattlesnake is the largest venomous snake in North America. Some reach 8 feet (2.4 meters) in length and weigh up to 10 pounds (4.5 kilograms

These stout-bodied pit vipers generally live in the dry, pine flatwoods, sandy woodlands, and coastal scrub habitats from southern North Carolina to Florida and west to Louisiana. Their pattern of yellow-bordered, light-centered black diamonds makes them among the most strikingly adorned of all North American reptiles. They are natural exterminators, surviving on such household pests as rats and mice, as well as squirrels and birds.

The eastern diamondback is not endangered, but because of indiscriminate killing, widespread loss of habitat, and hunting, its numbers are decreasing throughout its range.

Thanks, he was pretty cooperative, as I chased him into the woods, lol

nice photos of this big one :)

Thanks, I was pretty excited when we spotted this beauty

Was ver cool 2 see him. I am a native floridian and hve never got 2 see 1 alive and happy.

Well we appreciate your help!

no not in my yard at a park, and I have and still do walk in the woods often and never have been lucky enough to spot one, been pretty cool, and your welcome S Frazier, as you can tell by my post scientific name matter not to me, lol, I figure most of us can't pronounce or will remember the scientific name, lol

it was very cool, I was and am still very excited by spotting it, lived here all my life and never have seen one , not alive anyway, which is the preferred by me, I will put in the scientific name

Was that in your yard?

Very cool in my book! Can you help us by filling in the Scientific name for this eastern diamondback rattlesnake? It's Crotalus adamanteus. http://en.wikipedia.org/wiki/Crotalus_ad.... Many thanks!

Wow, AWESOME shot. Must have been your lucky day!