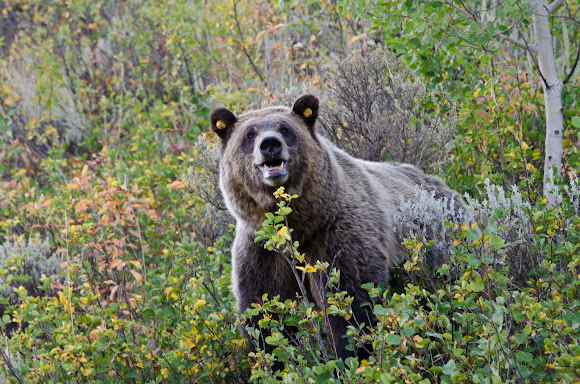 Female Grizzly with three cubs. "610" refers to tag numbers given by U.S. Fish and Wildlife Service. One of the cubs was "adopted" from 610's mother, a bear designated "399."

610 and 399 are seen freqently alongside road in Grand Teton National Park. Many grizzly (and black) bears with cubs habituate roadsides, because the presence of people offers some protection against the cubs primary predators, male grizzlies. However, with people come cars and there is always the danger of one of these animals becoming injured or killed due to their close proximity. To my knowledge, no human has been attacked in the the Greater Yellowstone Eco-System during these roadside encounters. This individual was photographed alongside Pacific Creek Road, one of the least travelled roads in Grand Teton, except when the bears are roaming. Shot this image from the car at close range, <30 yards. The group shot was taken at the same location the following day.

I agree with Yasser is there more to the story? She looks a little agressive.

Jeff, that's a wild photo! What's the story behind it? I'd love to hear more about how you managed to snap it.