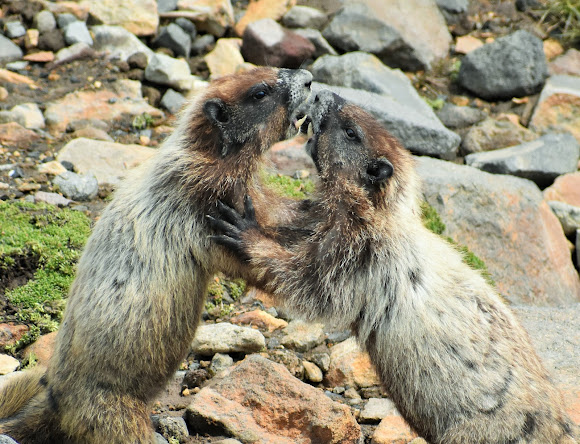 Hoary Marmots is the largest member of the squirrel family. Adults range from 62 to 82 cm (24 to 32 in) in total length, including a 17 to 25 cm (6.7 to 9.8 in) tail. They are starting to put on weight now - by fall adults will weigh around 22 lbs. and exceptional ones as much as 30 lbs. I was lucky enough to capture these guys play fighting, which is one of their favorite past times. Notice their large teeth and claws. Pic 3 shows another one close by foraging and collecting grass to take back to the den for storage.

Spotted at Mount Rainier National Park in the Alta Vista area above Paradise. At or near 7000 ft. in a very rocky ravine with some snow pack still left. Pic 5 shows them going into one of their den entrances under the snow. Pic 6 shows one of their other den entrances. The marmots hibernate seven to eight months a year in burrows they excavate in the soil, often among or under boulders. Each colony typically maintain a single hibernaculum and a number of smaller burrows, used for sleeping and refuge from predators. The refuge burrows are the simplest and most numerous type, consisting of a single bolt hole 1 to 2 metres (3 ft 3 in to 6 ft 7 in) deep.

Thank you so much Daniele I'm truly honored and thank you Zlatan for your kind words.

Wow. Great one! and congrats.

"Our Spotting of the Day shows impressive claws and teeth on this pair of wrestling Hoary Marmots (Marmota caligata cascandensis), but they're just play fighting. Play fighting is a common form of social behavior in a wide range of mammals, birds, and some other taxa. A favorite pastime of juvenile marmots, play fighting may help individuals practice for establishing later dominance relationships. Hoary marmots are the largest North American ground squirrel; the word "hoary" means grayish-white, and refers to the silver-gray fur on their shoulders and upper back. This well-documented spotting also shows a marmot collecting grass as well as the entrance to their den: check it out!"

Thank you so much Neil for you kind words. I had a lot of fun watching and taking pictures of those two play fighting and wrestling. They were really putting on a show.

I really like this spotting, and it makes me smile. Congrats on your nomination for SOTW, Brian.