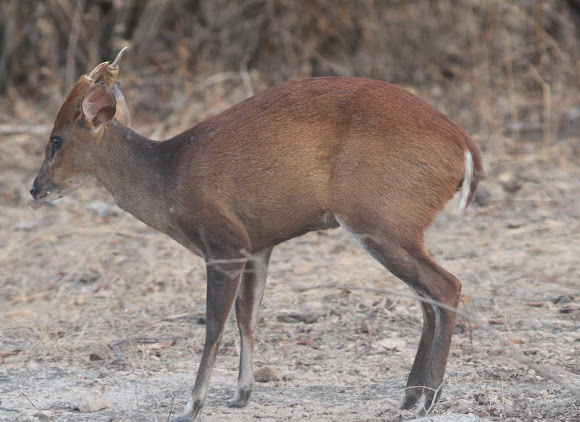 The Indian muntjac has a short but very soft, thick, dense coat, especially those living in cooler regions. Coloration of the coat changes from dark brown to yellowish and grayish brown depending on the season. The muntjacs' coat is golden tan on the dorsal side and white on the ventral side of the body, the limbs are dark brown to reddish brown, and the face is dark brown. However, the ears have very little hair which barely covers them.

The Indian muntjac is among the most widespread but least known of all mammals in South Asia. It is found in Bangladesh, southern China, northeastern India, Sri Lanka, Nepal, Pakistan, Cambodia, Vietnam, the Malay Peninsula, the Riau Archipelago, Sumatra, Bangka Island, Belitung, Java, Bali, and Borneo. This species is most densely located in Southeast Asia. The Indian muntjac is found in tropical and subtropical deciduous forests, grasslands, savannas, and scrub forests, as well as in the hilly country on the slopes of the Himalayas. They are found at altitudes ranging from sea level up to 3,000 meters (9,800 ft). They never wander far from water. Also, males usually have their own territory, which may overlap the territories of a few females but not of another male.