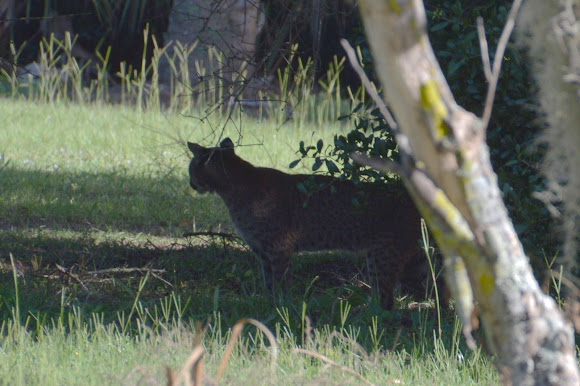 identifiable by its short tail (or bob) and the fringes of fur that outline the sides of its head. It weighs between 13 and 30 pounds and has a tail with white on its underside and black markings on its top side. The Florida bobcat has spots of white fur on all parts of its fur, which can range in color from reddish-brown to grey. The adult bobcat can grow to about 50 inches in length and stands 21 inches tall on average. (PawNation)

Widely distributed throughout most of North America, this cat has adapted well to neighborhoods throughout Florida. The bobcat is equally at home in deep forest, swamps, and hammock land. Thick patches of saw palmetto and dense shrub thickets are important as den and resting sites in Florida. In rural areas, bobcats can range five or six square miles and generally cover their territory in a slow, careful fashion. In urban to suburban areas, the range of territory usually decreases to 1 or 2 miles. (Florida Fish and Wildlife Conservation Commission)

Not a very good photo but it is the first bobcat sighting I've seen since moving back to Florida almost 5 years ago, I was excited to see it!

Thanks Luis! Hidden in the shadows and would not look my way at all!