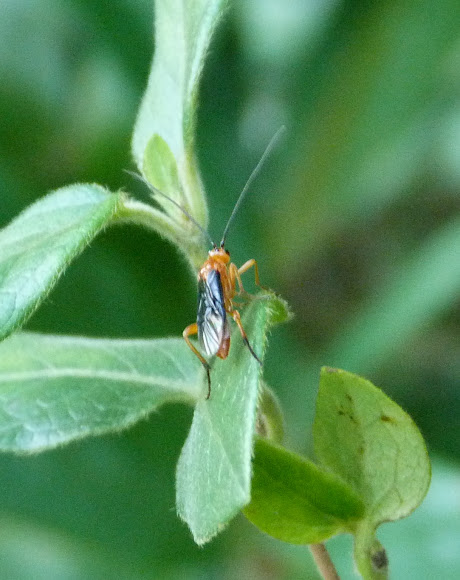 Some species of ichneumon wasps lay their eggs in the ground, but most inject them directly into a host's body, typically into a larva or pupa. Upon sensing the vibrations emitted by a wood-boring host, the female wasp will drill her ovipositor into the substrate until it reaches the cavity wherein lies the host. She then injects an egg through the hollow tube into the body cavity. There the egg will hatch and the resulting larva will devour its host before emergence. How a female is able to drill with her ovipositor into solid wood is still somewhat of a mystery to science, though it has been found that there is metal (ionized manganese or zinc) in the extreme tip of some species' ovipositors. The adult insect, following pupation is faced with the problem of extricating itself from tunnels of its host. Fortunately, the high metal concentrations are not limited to the female's ovipositor as the mandibles of the adult are also hardened with metals and it uses these to chew itself out of the wood.

Thanks for pointing me in the right direction Chun! I was able to find an exact match on bugguide!

Probably a Ichneumon Wasp. try checking it out.