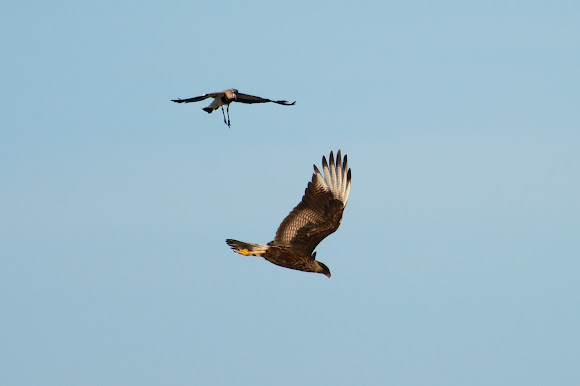 Spotted this Southern Crested Caracara in the wetlands of Arroyo Maldonado, Uruguay. The Southern Crested Caracara, also known as the Southern Caracara or Carancho, is a bird of prey in the family Falconidae. A bold, opportunistic raptor, the southern crested caracara is often seen walking around on the ground looking for food. It mainly feeds on carcasses of dead animals, but will steal food from other raptors, raid bird nests, and take live prey if the possibility arises (mostly insects or other small prey. It has a total length of 50–65 cm and a wingspan of 120–132 cm. Weight is 0.9-1.6 kg. In this event, it was being attacked by a pair of Southern Lapwings (Vanellus chilensis), who were eventually successful in chasing off the raptor. Southern Lapwings are ferocious when it comes to defending their nesting areas.

The southern crested caracara occurs from Tierra del Fuego in southernmost South America north to the Amazon River region and southern Peru. An isolated population occurs on the Falkland Islands. It avoids the Andean highlands and dense humid forest, such as the Amazon rainforest, where it is largely restricted to relatively open sections along major rivers. Otherwise, it occurs in virtually any open or semi-open habitat and is often found near humans.