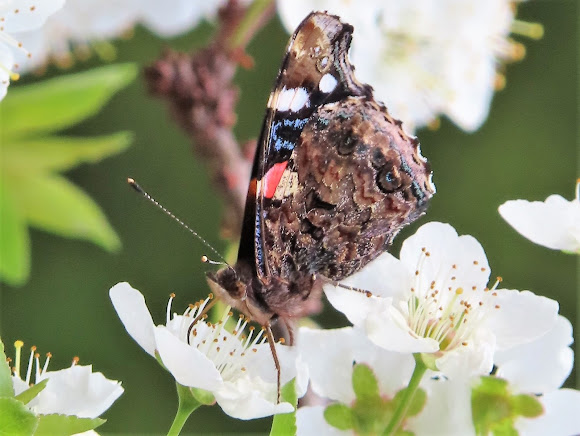 Butterfly with front wings of up to 3 cm, very characteristic for the red stripe that runs along the base of the hind wings and the central part of the fore wings, leaving white spots on the outside of the latter; the background color is dark. The larva is black to green or dark brown in color and has a yellow stripe on the side; It has spikes of the same color.

It flies from February to April (wintering specimens) and from May to October (specimens born during the year). Wintering imagos can fly on sunny winter days. The imagos are attracted, like those of many other nymphalids, by the decomposing fruit and by the sap and flowers of various trees, shrubs and plants (Hedera, Salix, Rubus, Budleia). Egg laying is done one at a time on the reverse side of the leaves. The caterpillar is very variable in color, blackish with black or grayish-green spines with pale spines, and usually has a yellow zigzag lateral line. It takes refuge in a shelter of leaves joined with silk, leaving only to feed. The chrysalis is grayish brown with golden spots, being suspended from leaves, branches or cracks. It winters as an imago among the vegetation or hiding in cavities (walls, rocks, piles of wood), or as a chrysalis.

It is extended by the Canary Islands, North Africa, and Europe to North and Central America and Hawai. It is present throughout the Iberian Peninsula and the Balearic Islands. In Asturias it is common, being present even in the cities, although it is not abundant. It is migratory and can travel (like C. cardui) distances of thousands of kilometers. In the Mediterranean area, it is considered that in the autumn the massive arrival of migrants from central and northern Europe takes place, and in spring the descendants of this migration recolonize northern Europe.