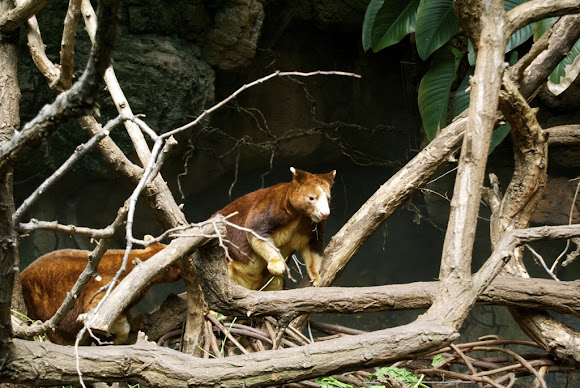 also known as the Huon Tree-kangaroo it is a tree-kangaroo native to the Huon Peninsula of North Eastern New Guinea. Under the IUCN classification, Matschie's Tree-kangaroo is Endangered. With a body and head length of 20 to 32 inches (810 mm), Matschie's Tree-kangaroo are much smaller than Australia's well-known red kangaroo. An adult male weighs between 20 and 25 lb (9–11 kg). An adult female weighs between 15 and 20 lb (7–9 kg). The most distinctive trait of all tree kangaroos is the hair whorl they possess. It is a patch of hair that goes out in many directions and its location ranges from up near the shoulders all the way down to the tail. The Matschie’s tree kangaroo is golden on its ventral side, lower parts of its limbs, ear edges, belly, and tail, and the rest of its body is a chestnut brown color, except for usually having a dark stripe down its back. Their faces are typically an array of yellow and white colors. Matschies’ ears are small and bear-like looking and they do not have a good sense of hearing because of it. They have curved claws on their forelimbs and soft pads on their hind limbs that aid in their climbing ability, and they have some independent movement of their digits as well as good dexterity due to their forelimbs being able to bend a great deal. Sexual dimorphism is very low, with males and females being of about equal sizes.

Matschie's Tree-kangaroo lives in the mountainous rainforests at elevations of between 1000 and 3300 m. The kangaroo tends to live either alone or with very small groups, usually composed of just a mother, a joey, and a male. They spend most of their time in the trees and come down occasionally to feed. They are very adept at hopping and can leap up to 30 feet (9 m). In the wild, researchers have found most Matschies’ live alone or in small assemblies, containing maybe a mother and her offspring and one male. Matschie’s tree kangaroos are restricted to the Huon peninsula of Papua New Guinea, a subdivision of Tumbanan faunal province, and are the only tree kangaroos found there. They are also residents on the island of Umboi, which is just off the coast of Papua New Guinea. However, most scientists believe the tree kangaroos were introduced onto this island and were not originally found there. The Matschies’ prefer to live in deciduous forests and tropical rainforests because they remain in trees for most of their days. They mainly live in the northeast interior of New Guinea and their home range sizes consists of about 25 hectares of the area.

In the wild, it will usually feed on leaves, fruits and mosses. When kept in zoos, it feeds on apples, carrots, yams, corn on the cob, celery, kale/romaine, high fiber monkey biscuits, tofu, hard boiled eggs, and various types of tree boughs (elm, willow, etc.) Visited NYC in July this year. Spent an entire day at the Bronx Zoo, where I must say, the animals were happier than I've ever seen (for zoo animals), and for good reason- the enclosures were spectacular and well-maintained.