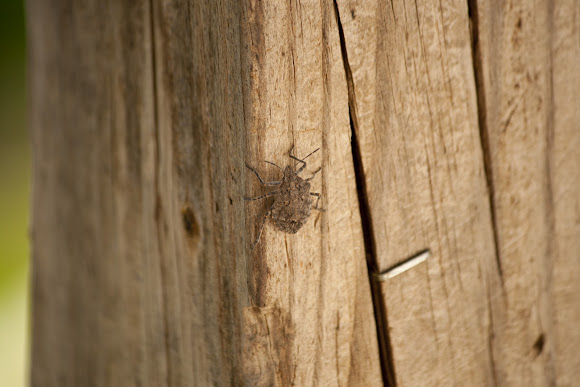 Pentatomidae, Greek pente meaning five and tomos meaning section, is a family of insects belonging to order hemiptera that includes some of the stink bugs and shield bugs. Their antennae are 5-segmented, which gives the family its scientific name. Their bodies are usually shield-shaped. The forewings of stink bugs are called hemelytra, with the basal half thickened while the apex is membranous (as are the hindwings). The name stink bug derives from their tendency to eject a foul-smelling glandular substance when disturbed; in some species the liquid contains cyanide compounds with a rancid almond scent. This is a form of antipredator adaptation. The idiomatic term "stink bug" is also applied to distantly related species such as Boisea trivittata, the "boxelder bug", and entirely different types of insects such as beetles in the genus Eleodes ("pinacate beetles"). Many stink bugs and shield bugs are considered agricultural pest insects, because they can create large populations, they suck plant juices and damage crop production, and they are resistant to many pesticides. However, some genera of Pentatomidae are considered highly beneficial: the anchor bug, which can be distinguished by the red-orange anchor shape on the adult, is one example. It is a predator of other insects, especially Mexican bean beetles, Japanese beetles, and other pest insects.

I am not certain what species exactly this is, I just know it belongs in the stink bug family.