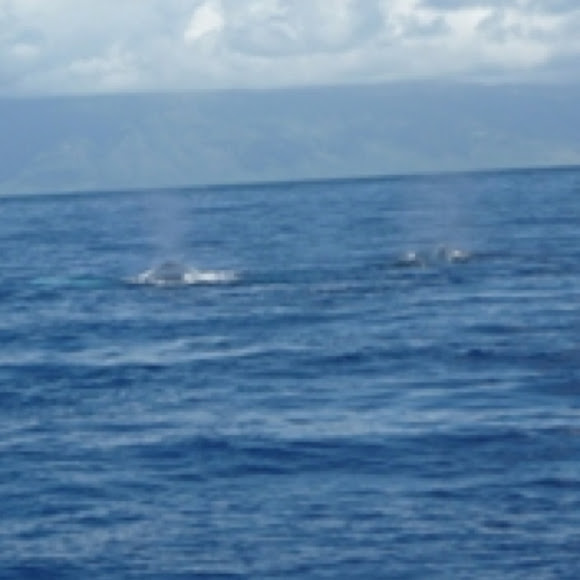 The Humpback whale is a species of baleen whale and is one of the larger rorqual species. Humpbacks can range between 12-19 meters. Males are usually between 12 and 15 while females are a little larger ranging between 16 and 19 meters. Humpback usually weigh about 36 000 kilograms(79 000 pounds). Researchers are able to tell whales apart by their flukes, the underside of each whales fluke is different from any other whale. Humpbacks colour is usually black, however grey/blue colorations occur also. Humpbacks are recognizable by their long pectoral find and knobbly heads. Another interesting point of variation is that every male has a different song. Humpbacks share their environment with many other ocean species. Sharks are one of these animals. Unfortunately every once in a while a baby humpback will be found with many shark bites and they often will not survive. Humpbacks have a symbiotic relationship with barnacles. The barnacles attach themselves to the whales body and get to travel making it easier for them to eat. This is an example of commensalism because the barnacle benefits and the whale isn't harmed or benefited. Some adaptations that humpbacks have is baleen so that they can eat a bunch of krill and then filter all the water out without spitting the krill out. Humpbacks also have rorquals stretching from their under jaw to halfway down their underside. Rorquals are helpful to the whale because it helps them open their mouth even wider so they can eat more krill. Humpbacks reproduce sexually. Males are often scarred from fighting over females. When she decides who she likes it just kinda happens. Females gestation period lasts from 11-12 months and the baby will associate with its mother for 1-2 years. Females reach sexual maturity at about 5 years old and males at about 7. Calving and mating occur in Hawaii starting in around November and going to about March. However most calves are born between January and February.

Humpbacks feed mainly on krill which are small crustaceans that look like shrimp. They also feed on small fish such as herring, mackerel, capelin, scad, land lance, small salmon, and cod. Humpbacks feed when they are down in the cold Arctic and Antarctic waters an eat up to a ton of food per day. They eat to build up a thick layer of blubber for when they are in warmer waters( Hawaii) and there is less food available. The blubber layer on a large whale can be up to 18 inches thick! Since humpbacks are so big they don't have very many hunters. However pods of killer whales will go after a migrating whale. Most of the time it is their calves they are going after since they are the easier target. Humpbacks are also sometimes subject to shark attacks, again it is often the young that they go after. Humpbacks are found in all oceans of the world, however when it comes to breeding and calving in Hawaii, they prefer near shore areas. Their habitat ranges from polar to tropical water, predominantly in the Arctic, Antlantic, an Pacific oceans. In the United States, Hawaii is the only breeding ground for Humpbacks. Humpbacks mate and calve in Hawaii. The population in Hawaii as well as the population in the Arctic migrate to Hawaii to reproduce, however they never cross breed. Humpbacks interact with each other more than any other animal. When the female is with her calf, often she will have an escort as well. The escort cam be male or female, but is most often male, they usually only stick around for a few hours. Humpbacks typically belong to a pod consisting of 2-3 individuals, however pods with 15 whales have been spotted.