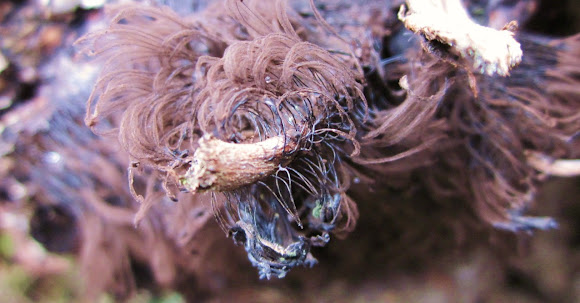 Stemonitis is a distinctive genus of slime molds found throughout the world (except Antarctica). They are characterised by the tall brown sporangia, supported on slender stalks, which grow in clusters on rotting wood. Identification within the genus is difficult, and can only be performed with confidence using a microscope --- seperated string,falling together as cluster, about several (2-5) cm long, at the bottom of the string a darker section about 5 - 15 mm

its another species from the genus i found previously ( http://www.projectnoah.org/spottings/729... ), this one is hair like, the other was more like little sticks. the structure of the threads were also different. the other one wasn't so large, this spotting had almost no strings as short as the other, i suspect i have here an other species than before !!

I found some in my backyard while cleaning up. If you move it the spores come out as brown dust and then quickly disintegrate into the air.

Fantastic looking stuff - love the way it's 'emanating' from the wood in pic3. Excellent photos - thanks.