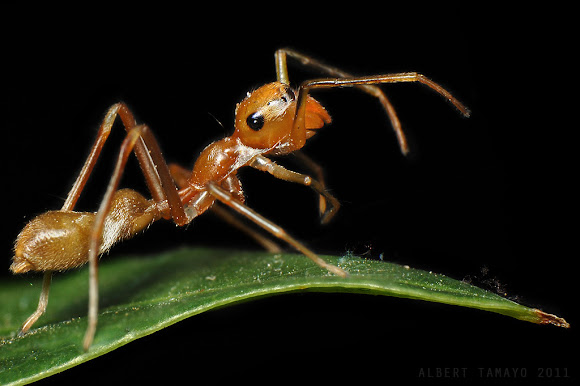 The ant-mimic spider meets the weaver ant. MIMICRY is a strategy for survival. By resembling and even behaving like unpalatable or dangerous ant species, some spiders in ant’s clothing minimize the chance of being eaten by predators. Of course, the casual observer who chances upon these spiders would dismiss them as ants. Several of these ant-mimics are jumping spiders (family Salticidae) belonging to the genus Myrmarachne. The Kerengga Ant-like Jumper (Myrmarachne plataleoides), as the name indicates, is a mimic of the kerengga or weaver ant (Oecophylla smaragdina). It is believed that these spiders are able to produce pheromones, or chemical scents, to trick the weaver ants into accepting them as members of their colony. As a final touch to the disguise, the spider often holds up its two front legs like a pair of antennae. -source: href="http://members.fortunecity.com/chinfahshin/1folder/antmimic.html

This would be my last post for my ant-mimic jumper spider series. These ant-mimics coexist with the weaver ants in the mango tree in front of our old house. I often see them falling on the roof of my car especially when there is a strong wind. I missed seing them ever since we moved to a new location nearby.

Really , really fantastic!! The nature is incredible....Excellent photos and video!
All my appreciations, Albert!

Amazing! I've seen ant mimicking bugs, and photos of ant mimicking spiders... but never as convincing a disguise as this. Great photos/video too.