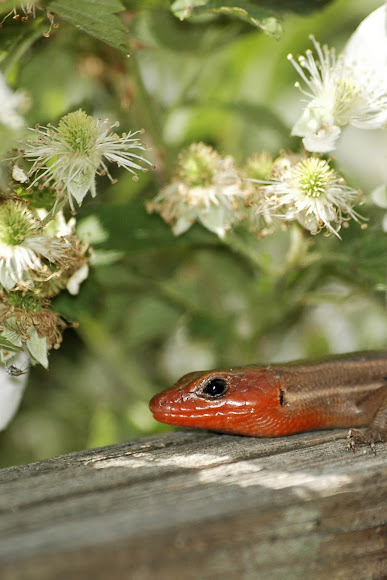 It is a small to medium sized skink growing to about 12.5 centimetres (4.9 in) to 21.5 centimetres (8.5 in) total length. Young Five-lined Skinks are dark brown to black with five distinctive white to yellowish stripes running along the body and a bright blue tail. The blue color fades to light blue with age, and the stripes also may slowly disappear. The dark brown color fades, too, and older individuals are often uniformly brownish. The Southeastern Five-lined Skink, E. inexpectatus, of the Southeastern United States is very similar to this species and there is some overlap in range. The two species can be told apart based on characters of scales. The Broad-headed Skink, E. laticeps, is similar, and may be difficult to distinguish from E. fasciatus. The former species usually lacks the two enlarged postlabial scales characteristic of E. fasciatus (Palmer et al., 1995). Adult male Broad-headed skinks, with their large size and swollen red head, are readily distinguished from E. fasciatus (Beane, 2005).

Adult male resting in some shade

Nice capture, I had no idea these looked so much like the broad-headed skinks. I must check all of my skink photos to be sure I have not mis-IDd them, now that I know this. Thanks Liam!