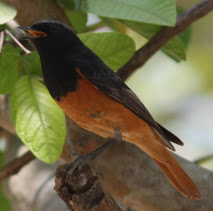 The species originally inhabited stony ground in mountains, particularly cliffs, but since about 1900 has expanded to include similar urban habitats including bombed areas during and after World War II, and large industrial complexes that have the bare areas and cliff-like buildings it favours; in Great Britain, most of the small breeding population nests in such industrial areas. It will catch passing insects in flight, and migrants often hunt in coastal tide-wrack for flies or tiny crustaceans. Its quick ducks of head and body are robin-like, and its tail is often flicked. The male has a rattling song and a tick call

It was a very bold bird.I saw 3 on the same day