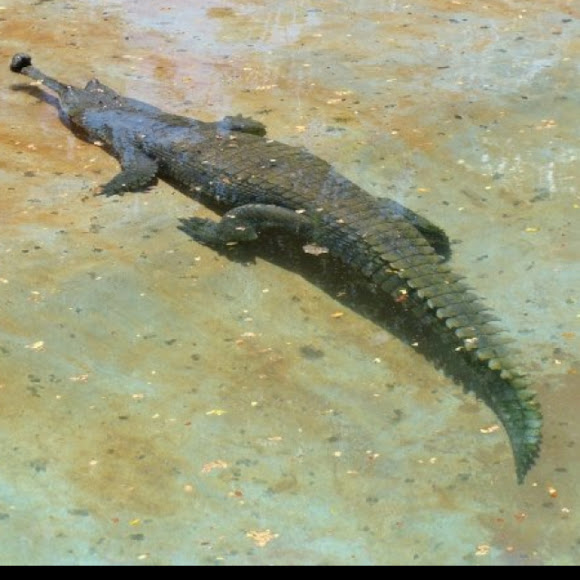 Is uniformly dark olive-grey with a pale yellow belly. Juveniles have dark spots and cross bands against a light background. The teeth are needle-like and the eye are green frosted with with back. A large male can reach 23 feet in length, and a female 15 feet. Adult male develop a pot-like structure on the end of the snout. This nose knob is used to produce a bussing noise that repels rival males and it is used as a warning system. The average weight is around 680 LB, but there have been encounters where they have weighed more than 1,000 LB.

These photos were taken at Honolulu zoo, Oahu, Hawaii. Gharials are found in Himalayan-fed river systems, from Indus, Ganges, Brahmaputra rivers, to the coast of Burma, Northern and Eastern India, Nepal, Bangladesh and also Pakistan. They prefer deeper, fast moving river that have relatively clear eater with high banks, deep pools, and sandbanks that are used for nesting. They will rarely move farther than a few feet from the water.

The Gharial was had almost become extinct, in 1974, India's government and tr united nation food and agricultural organization took a survey of the population of them, and there was an estimated amount that no more than 50 to 60 surviving adults. The Gharial is still listed as endangered, but now the Gharials future is looking more promising as sanctuaries have involved collections of eggs for hatchery incubation.

Thanks for contributing your spotting of this unique crocodilian. Can you tell us something about your spotting? Was this in a zoo? Thanks and welcome to Project Noah!