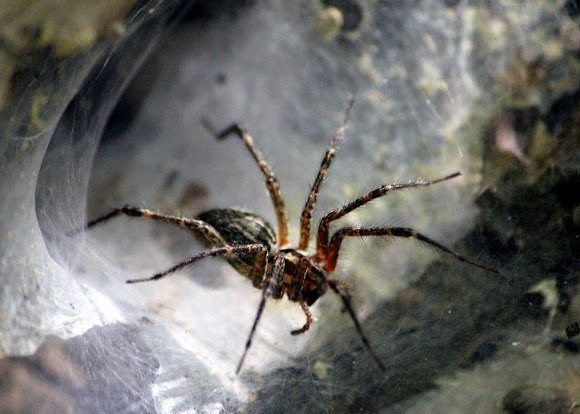 A pair of broad, dark, brownish bands runs lengthwise adjacent to a lighter mid-band on the lightly haired and roundish carapace. The legs are cream and dark yellowish-brown. The oblong abdomen is brown with a broad, reddish-brown, zig-zag stripe with a cream-colored border on both sides. The spinnerets are noticeably long. Two species of funnel weavers are found in Missouri, a naevia and a. pennsylvanica. Although the former is usually larger and darker, their similar color patterns make them difficult to distinguish. Size: The funnel web spider is a relatively large one, females averaging 10-20mm and males slightly smaller.

These spiders typically build webs several inches above the ground in short grasses and in the window wells of outbuildings. Funnel weavers hide in the concealed area of the funnel and then dash out onto the sheet portion of the web to capture an insect caught in or walking across the silk platform.