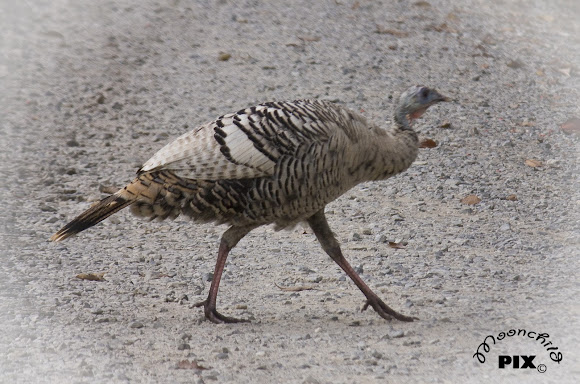 This isn't an albino turkey, but rather it is an Amelanistic turkey. Amelanism "is a pigmentation abnormality characterized by the lack of pigments called melanins, commonly associated with a genetic loss of tyrosinase function.

This is one of at least two Amelanistic wild turkeys living in Cades Cove of The Great Smoky Mountains, Tennessee. I was lucky to see this one twice on my recent visit there. People have been talking about seeing him and I was on Sparks Lane when a flock came walking by with this guy as a member. He seems small so he is probably young. Albinism is a genetic mutation that prevents the production of melanin in the body. Leucism is a genetic mutation that prevents melanin from being deposited normally on feathers. Since the white patches on birds have no melanin, birds with these patches have been said to have partial or imperfect albinism.

Thanks for the input Liam but this guy is defiantly not a Narragansett.

Actually, it looks like a Turkey of the Narragansett breed.