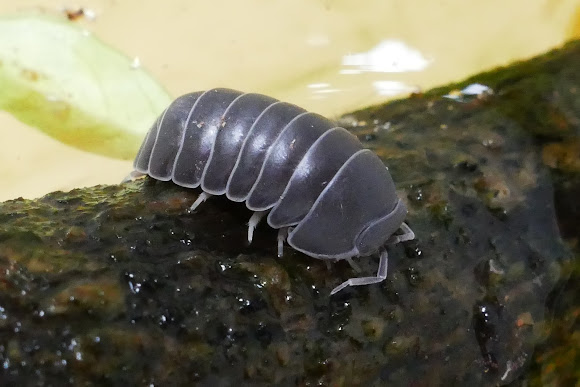 Armadillidium vulgare is an interesting species, but despite being widespread here, is not an Australian native; it originates in Europe. Common names are numerous and include: woodlouse (pl. woodlice), slater, pill bug, sow bug, roly-poly, to name but a few. It's not an insect either, but rather is a land-dwelling crustacean, and is more closely related to crabs, prawns and krill. Typical defense behaviour is to roll up into a little ball. Food mostly consists of decaying organic matter, but will also eat fungi. This specimen was about 15mm in length, and colour slate grey.

Suburban backyard in Brisbane, Queensland. This specimen had fallen into a small pond and was clinging to a branch, but it could have escaped. Armadillidium vulgare is able to withstand drier conditions than many other woodlouse species, but still prefers damp environments such as deep soil cracks, and under rocks, leaves, bark, fallen branches, etc.

Thanks, Tukup. I was so surprised to learn they weren't insects.

Great close-up shots Neil. It's hard to remember they are crustaceans and not insects. Thanks for sharing.