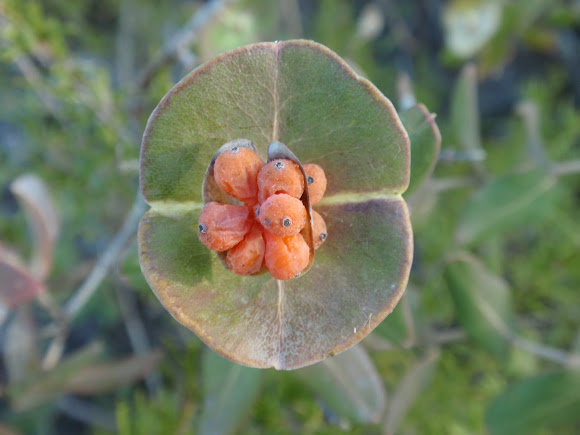 Climbing shrub (1 to 3m tall), evergreen , belongs to the Caprifoliaceae family. It has flexible stems, with abundant and intertwined branches. The leaves are opposite to each other, simple, dark green and bright with the ones close to the inflorescence united at the base almost in the form of a bowl. Tubular flowers initially rosy, but slightly yellow with time. The fruits are red pseudo berries, they are toxic. Distribution: Mediterranean Region, Southwest Asia and the Azores . It is however, cultivated elsewhere as an ornamental plant. In mainland Portugal, is distributed by the Centre and South, and its occurrence in the North is limited to the valleys of the Douro and its tributaries . Flowering: April to August.

Shrublands, clearings and edges of forests and woodlands in Mediterranean environment, often in rocky and stony land. Indifferent to soil composition .

I finally found out what this is!!! =D
Recently while hiking, I found this plant again this time it was flowering! I searched for plants of this region and finally found it! Knowing the flowers made it all much easier!

I had to translate the description and habitat data from a Portuguese site and I didn't know how to translate some technical terms, but I think the main things are there.

Here is a link to the spotting with the flowers: http://www.projectnoah.org/spottings/331...

I'll try to take more pictures to the leaves and the plant in general to see if it can help.

Looking at the leaf form I'm wondering if it might be a species of euphorbia. I haven't seen any fruiting species though.

Quite an interesting lil plant/flower you've got there. Am anxious to see what the ID is.