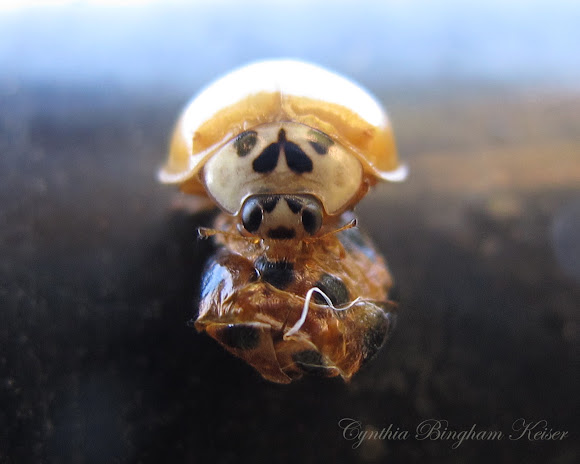 This ladybug just emerged when I walked up. You can see how translucent it still is and how it walks on and around the pupal exoskeleton (exuvia).

On a chain link fence under palm trees.

This beetle is native to eastern Asia and was introduced to North America and Europe to control aphids and scale insects. Aka Japanese ladybug and Harlequin ladybird. "H. axyridis, like other lady beetles or ladybirds, uses isopropyl methoxy pyrazine as a defensive chemical to deter predation, but also contains this chemical in its hemolymph at much higher concentrations than many other such species. These insects will "reflex bleed" when agitated, releasing hemolymph from their legs. The liquid has a foul odor (similar to that of dead leaves) and can cause stains. Some people have allergic reactions, including allergic rhinoconjunctivitis when exposed to these beetles. Sometimes, the beetles will bite humans, presumably in an attempt to acquire salt, although many people feel a pricking sensation as a lady beetle walks across the skin. Bites normally do no more harm than cause irritation although a small number of people are allergic to bites." - Wikipedia I shot this with my compact Canon PowerShot G12 using the scene mode of Kids & Pets and manual focus.

Thank you Yasser! I love the emerging spottings. It's amazing what arthropods can do!

Incredible! What a series Cindy!

Great series. Love it! Thanks for posting.

Thanks Emma. It's nice when I have good timing on spottings :)

Thank you misako.hill and KarenL. If only I was there minutes earlier :)

Yes, they're either orange or red. I can't tell which one this will be since it's my first newly emerged ladybug sighting :)

Interesting color, does it become darker when it ages?