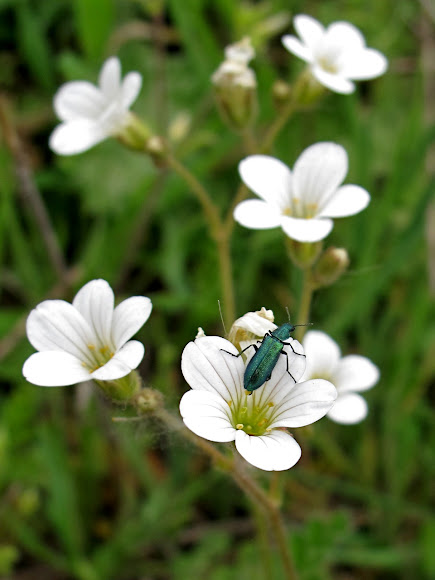 This beetle (about 1cm long) was a very frequent pollinator of numerous species that we saw over the course of two weeks in Andalucia, usually of Asteraceae spp. In this case it's on Saxifraga granulata.

From Wiki (worth checking out the full article -link above) : Cantharidin, the principal irritant in Spanish fly, was first isolated and named in 1810 by Pierre Robiquet, a French chemist then living in Paris, from Lytta vesicatoria. Robiquet demonstrated that cantharidin was the actual principle responsible for the aggressively blistering properties of the coating of the eggs of that insect, and established that cantharidin had very definite toxic and poisonous properties comparable in degree to that of the most violent poisons known in the 19th century, such as strychnine.[6]