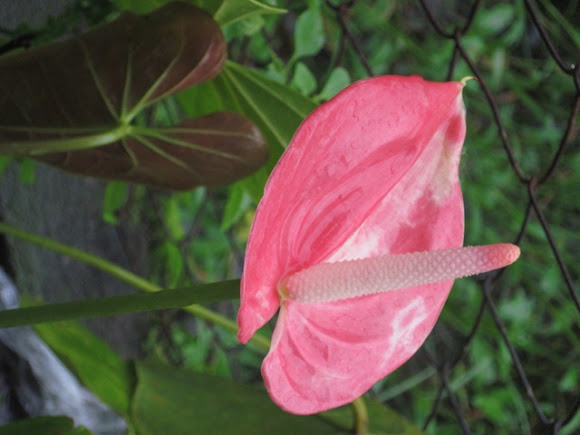 Anthurium ( /ænˈθjuːriəm/;[1] Schott, 1829), is a large genus of about 600–800 (possibly 1,000) species, belonging to the arum family (Araceae). Anthurium can also be called "Flamingo Flower" or "Boy Flower", both referring to the structure of the spathe and spadix. TROPICOS lists 1901 types, although some of these are duplicates. It is one of the largest and probably the most complex genus of this family; certainly it is one of the most variable. Many species are undoubtedly not yet described and new ones are being found every year. The species has neotropical distribution; mostly in wet tropical mountain forest of Central America and South America, but some in semi-arid environments. Most species occur in Panama, Colombia, Brazil, the Guiana Shield and Ecuador. According to the work of noted aroid botanist Dr. Tom Croat of the Missouri Botanical Garden, no members of this genus are indigenous to Asia.[2] Deliberately or accidentally, however, some species have been introduced into Asian rain forests, and have become established there as aliens.