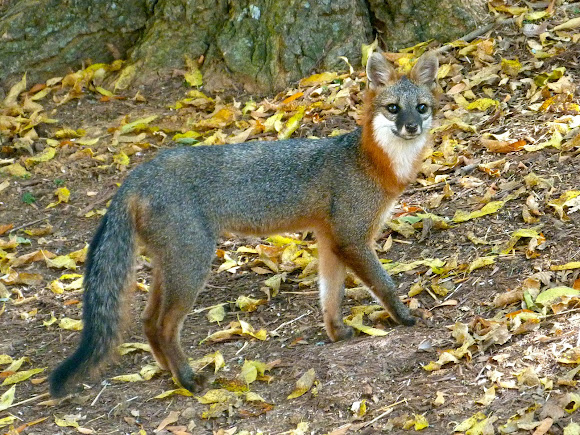 We have been watching these foxes since June this year when we first observed the vixen with her 3 kits - http://www.projectnoah.org/spottings/707... We still get regular daily visits from the vixen, & the 2 female kits that are still hanging around together, but we haven't seen the young dog fox for a while so we think he has moved on to establish his own territory. They eat spilled seed from the bird feeders, table scraps, & they dig for moles. We also occasionally leave dog food with worming medicine out for them. Today the 2 sisters were rooting around under the feeders as usual so I took a few photos.

Thanks Jacob & Gilma. Sadly my little fox family has moved on & I've not seen them for almost a year. I did spot a red fox in my yard last week though so maybe we will have more sightings in 2013.

What a gorgeous animal!! First time I see this beautiful fox so close! The pictures are amazing, I feel as if I was there! Thank you so much for sharing.

We saw the vixen occasionally last spring, but after she had her kits the whole family would visit us 2 or 3 times daily even in the middle of the day, & seemed comfortable to be around us as long as we didn't approach them. The kits have moved on now & we only see mom once or twice a week. Fingers crossed she will choose to have her next litter here in the spring!
I've not seen these guys climb - that must be a really interesting sight!

These are great pics. I have only seen these in the twilight, so never got a good look like this. I especially like the front shot, an also the great view of the black stripe down the tail. Have you seen them climb? Thanks for your feedback on my sighting, too.

Yes unfortunately they do have that tendency. We have a lot of feeders so there is usually somewhere the little guys can feed safely away from the bully birds & the squirrels! All I need to do is to work out how to stop the raccoon from stealing all the suet (& the suet feeders!)....!

I'll have to watch for blue jays now. We don't get too many of those....only one big bully at the bird feeder.

How lovely! Hopefully I will see more of the cardinals' courting in the spring! The blue jays are fun to watch too - the males feed the females & bring them little 'gifts' of twigs & pebbles!

The first time I ever realized that the cardinals were doing a courting dance (it really does take about a month in total) I was fascinated. They start off not really getting that close to one another but rather chasing one another. Then they get a little closer and fly a little slower and then finally they hang out side by side for a few days before finally permanently nesting for the season. So much fun. Yes, it is amazing how we can establish relationships with the wild. The other most significant relationship we have is with the squirrels who toss chestnuts at us when we sit on the deck with the dogs. It's the only time they toss the chestnuts still full of nuts. Fun....(as long as you don't get hit in the head with one of those nuts.....LOL).

It's amazing how it is possible to build up a relationship with the resident critters - I had a pair of blackbirds that nested in my yard for 12 years in the UK. The male became so used to me he used to hop onto the plate I used as a ground feeder while I was still carrying it after filling it! He would also dance around in front of me when I was in the yard to let me know when the bird bath was dry!
I really do hope to see more of the foxes next year & I will keep putting out food when the weather is bad. We've also put up lots of bluebird boxes & a martin house so hopefully we will get some more bird action too! The cardinals are so beautiful - we have several pairs but all the courting happened in our pine trees this year so we didn't get to see it!

Well it's likely that since you have provided her with such a great place with food that you will see her again in the spring with a new family. How fun! We have this great pair of cardinals that come back every year and do a mating dance for about a month in the spring in our Rose of Sharon plants. Fun to watch them come back yearly. Not as much fun as a fox and her kits though.

Hi Apple, I'm good thanks!
All the kits have moved on now - we last saw the 2 sisters about a month ago. It's kind of sad but I guess it was time for them to move on & find their own territories. We still see mom, but only once or twice a week at the moment though the scraps we leave out all disappear so maybe she just visits when we aren't around! Fingers crossed we will see her more regularly in the spring, & maybe with more kits!

Hello Karen..hope your holidays are treating you well. Was wondering how your beautiful fox are doing. Are they still coming around to feed?

Thanks Apple! We are very privileged to share our yard with these guys!

Excellent spotting! We have some fox in Michigan but nothing this large. Also, our fox is harder to get closer to in the wild.

Thanks Marta, Alice & 8BitFinch!
Marta, because we see these guys every day, it gives us a chance to really keep check on their health. A few months back we started seeing one of the kits scoot around on his backside the way dogs do when they get worms, so now they get wormed every 2 weeks - along with anything else thats stops by to dine on the dogfood we add the medicine to (raccoon, crows, feral cat!). Our vet is a good friend & he has been supplying us with slightly outdated avian safe worming solution FOC which has been a huge help.

I didn't realize how beautiful the Gray fox was with his white bib and big eyes. So nice that you can help keep them healthy and see them so often.

Nice! and you do a nice thing by helping them to keep healthy.

Thanks Carolina & ceherzog! Gray foxes are omnivores & fruit & seeds make up around 70% of their diet - mine enjoy sweet potato skins, cooked pasta & they love strawberries!

and 50 other people favorited this spotting