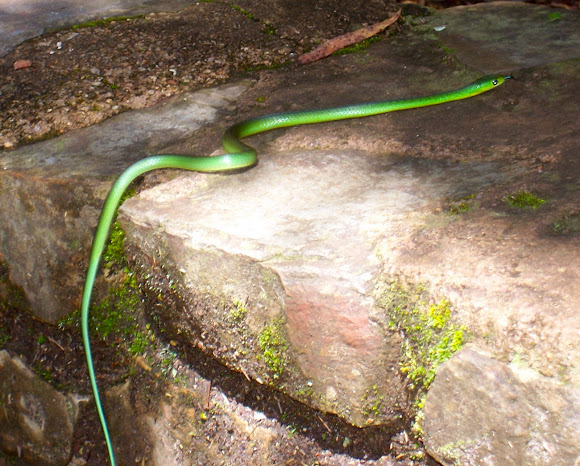 The Angola green snake can be identified by the black skin between its scales, its blue spots, round pupils, an excellent climbing ability and a diurnal lifestyle. It grows to an average length of 1 meter and a maximum length of 1.2 meters.

I spotted this at the Wonderview lookout point. There was quite a few people around at times. I was really surprised to see this snake just slither by.

please add this great spotting to this mission
http://www.projectnoah.org/missions/2273...
thanks

Thanks again Shu and thank Angelo for me for taking the time for this detailed ID.

I vote for Philothamnus angolensis.

Comment by Angelo: The green snake looks more like Philothamnus angolensis than anything else, though again the photos are not as sharp as one would like, and it just might be P. hoplogaster, which does occur much more frequently in Kruger. Nevertheless, I would be much more inclined to regard it as P. angolensis in that the green colour is far closer to the latter than to the former (the difference in shades is much more easily perceived than described, but once seen is very readily distinguished) and that angolensis sometimes has slight black edges to the dorsal scales anteriorly, and black interstitial skin between the scales (only seen when the neck is distended in the threat posture); the black edging varies from barely visible to clearly visible, but very broken and restricted, to tending to form bars rather like those of P. semivariegatus, though not so bold. P. hoplogaster has very little, if any, black edging to the dorsal scales anteriorly, and with no tendency to form even faint bars; the interstitial skin is also black, but only visible when the neck is distended. I think you can eliminate P. semivariegatus from the list of possibilities – individuals from that area are very boldly marked with broad, well-defined black bars anteriorly, and the posterior half or third of the trunk, and the tail, are either a much lighter, more yellowish green than the anterior half, or tending more or less strongly to a distinct bronze colour (most spectacular in individuals from Zimbabwe!).

Okay, Shu, thanks. I appreciate your dedication to the proper ID.

Dan: i was chatting to Dr Angelo Lambiris (one of the top herpetologists in the country) this afternoon, and he made me think i might have made an error on this one, going to mail him the pic for confirmation, but there is a possibility this could be "Philothamnus angolensis"

That's no problem marylou. It was a good suggestion. They do look similar.

Sorry, Dan for leading you astray! Glad to know that you got it for sure figured out. And I agree, more South Africans are always welcome! Such a highly diverse place!

Thanks for the comments too, Atul and Longmustache.

Thanks Shu for the correction. It's great to have more South African's on Noah.

Note on Species Suggestion: see the color of the tongue in the first pic (blue), note and the shape of the head... definitely not a Boomslang.
These are common snakes in southern africa, we catch them all the time here. The larger specimens do not have obvious "spots", the specimen we have in the reptile park at work (for example) has almost non-existent variegations.

No problem! Very cool sighting... I love those snakes. Not that the green mamba isn't cool, but the boomslangs are so interesting!! Glad to be of help to you Dan! :)

Thanks Marylou. I think you're right. Coloration is variable but upon closer inspection I can see the black markings that I see in many online images and judging by the description, it sounds like a Boomslang.

Very pretty... could it be a boomslang?