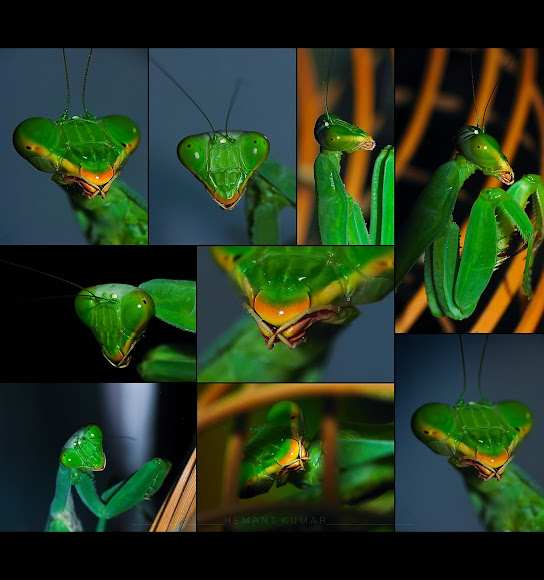 Mantodea (or mantises) is an order of insects that contains approximately 2,200 species in 15 families[1] worldwide in temperate and tropical habitats. Most of the species are in the family Mantidae. Historically, the term mantid was used to refer to any member of the order because for most of the past century, only one family was recognized within the order; technically, however, the term only refers to this one family, meaning the species in the other 14 recently established families are not mantids, by definition (i.e., they are empusids, or hymenopodids, etc.), and the term "mantises" should be used when referring to the entire order. A colloquial name for the order is "praying mantises", because of the typical "prayer-like" stance, although the term is often misspelled as "preying mantis" since mantises are predatory.[2] In Europe, the name "praying mantis" refers to Mantis religiosa. The closest relatives of mantises are the orders Isoptera (termites) and Blattodea (cockroaches), and these three groups together are sometimes ranked as an order rather than a superorder. They are sometimes confused with phasmids (stick/leaf insects) and other elongated insects such as grasshoppers and crickets.

thank you friends and Daniele, will do that thx

Hi Hemant! This is a a great montage, and stunning photography as usual. Our advice to you would be to select you favorite shot out of this as your title shot, and have the montage as one of your extra pics. This will show your spotting better as a thumbnail.

You got a wonderful series of shots!