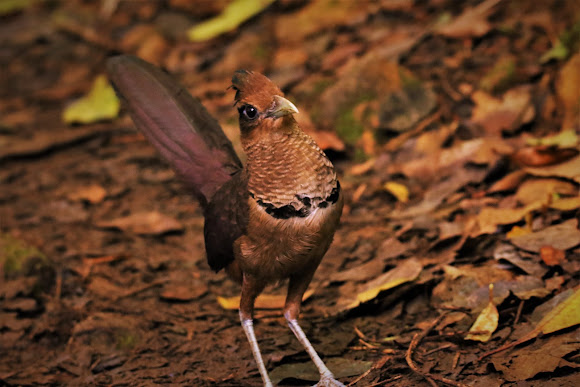 Considered a Threatened Species "The rainforest runner" is a large (48 cm) member of the Cuckoo family, it has a bushy -creste, long tail and neck, the adults are brown, glossed with green on the wings and purple in the tail, and curved beak. Some few year ago we did not have reports of this bird in Costa Rica.we now know we have them back, and specialist have report it in some few areas, a week ago 4 individuals were seen on Pocosol, at the Children's Eternal Rainforest Reserve, now the mecca of all of us in Costa Rica. This bird as well as antbirds usually follows swarms of army ants for hunting all kind of small creatures like insect, spiders, small lizards even snakes,that try to escape from the ants. The cuckoo is one of the birds on top of the hunting hierarchy. The Rufous - vented Ground Cuckoo inhabits the floor of very humid primary forests. On this occasion, I saw three individuals, one juvenile and two adults. A swarm of army ants was the attraction of this unique bird that along with several other species of antbirds were looking for food. The abundance of preys frightened by the ants were a magnet for the Cuckoos and the other birds that, without being disturbed by my presence, followed them; It was extremely interesting and a delight to observe this behavior and species interactions. The Ground Cuckoo was the largest of the birds that were hunting insects that escaped the ants, the birds were not bothered by my presence and allowed me to observe them closely without problems.

I consider it a rainforest version of a roadrunner, The rainforest-runner IUCN Red List of Threatened Species. many people refers to it as "a ghost in Costa Rica"

Jonathan Sequeira a month ago

Thanks everyone for all the notes. So glad more people get to know about another wonderful species form the rain forest of Costa Rica

Congrats on the SOTW Jonathan. Glad they're "back" in Costa Rica. Beautiful bird. Thanks for sharing.

Congratulations, Jonathan Sequeira. This was a totally new species for me...nice notes too!

MichaelS a month ago

Your Rufous-vented Ground Cuckoo spotting has been voted Spotting of the Week! Thank you for sharing these excellent field notes on this threatened bird with the Project Noah community! We look forward to seeing your next nature discovery!

Thanks a lot for the nomination

Thanks a lot. certainly a great species. more reports of the birds were done today. we are very happy to know that they are still around as we don't have many observations of this bird in our country .