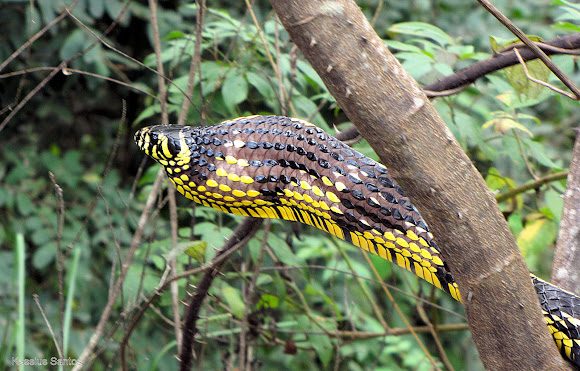 This guy had approximately 3 m in length. Despite the aggressive appearance, is a non-venomous snake. The volume near the head is not due to an animal swallowed. It is an intimidating attitude of snake, which felt threatened. It swells the air chatting to appear larger and more aggressive. Spoted on Serra da Canastra National Park, Minas Gerais, Brazil.

lateral flattening of its neck is common way of showing that it is pissed off. :) trinket snakes and other rat snakes does the same thing... nice spotting kassius.. :)

No Asergio, I saw this snake when was still relaxed. With my approach the snake began to erect and to inflate the crop. I know well that species and this is a typical behavior of defense of them.

Caninanas are among the most beautifull snakes in the world. This one has just swallowed something, since it's throat is distended, which is not normal.

Wow, what an impressive creature!