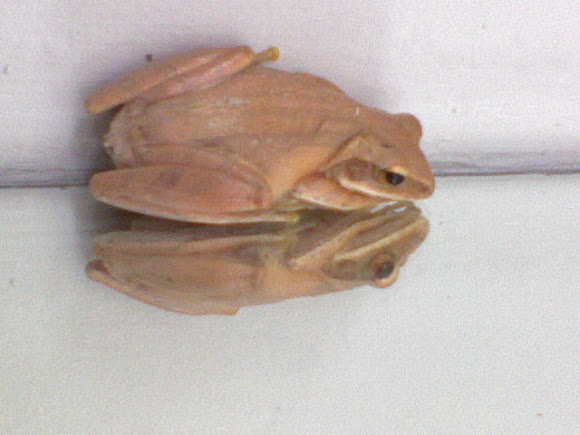 Frogs are amphibians in the order Anura (meaning "tail-less", from Greek an-, without + oura, tail), formerly referred to as Salientia (Latin salere (salio), "to jump"). Most frogs are characterized by a short body, webbed digits (fingers or toes), protruding eyes and the absence of a tail. Frogs are widely known as exceptional jumpers, and many of the anatomical characteristics of frogs, particularly their long, powerful legs, are adaptations to improve jumping performance. Due to their permeable skin, frogs are often semi-aquatic or inhabit humid areas, but move easily on land. They typically lay their eggs in puddles, ponds or lakes, and their larvae, called tadpoles, have gills and develop in water. Adult frogs follow a carnivorous diet, mostly of arthropods, annelids and gastropods. Frogs are most noticeable by their call, which can be widely heard during the night or day, mainly in their mating season.

a toad in the mirror

Do you have any other pictures? When you look at the toes ( in reflection you can see it also) it does look more like a common tree frog. Polypedates leucomystax. What do you think?