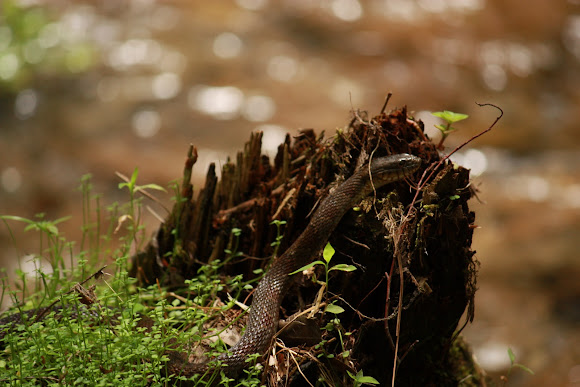 Northern Water Snakes are one of our most common snakes. Because their color patterns aren't always the same, and also because they are often covered with mud, water snakes are confused with other species. Northern Water Snakes grow over four feet long. They can be brown, gray, reddish, or brownish-black. They have dark crossbands on their necks and dark blotches on the rest of their bodies. Also, the older the snake gets, the darker it gets. An older snake will become black. The belly of this snake also varies in color. It can be white, yellow, or gray. Usually it also has reddish or black crescents (moon shapes).

Northern Water Snakes live near lakes, ponds, marshes, streams, rivers, and canals; just about anywhere there is water. They are active during the day and at night. They are most often seen basking on rocks, stumps, or brush. During the day, water snakes hunt among plants at the water's edge, looking for small fish, frogs, worms, leeches, crayfish, salamanders, young turtles, and small birds and mammals. At night, they concentrate on minnows and other small fish sleeping in shallow water.