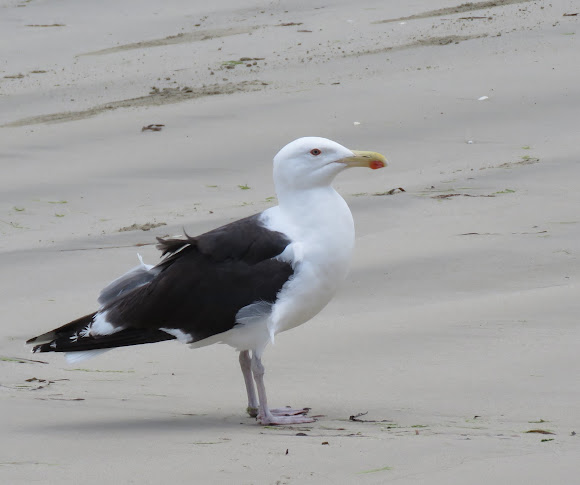 This is the largest bird in Laridae family, reaching about 70 cm in length, and over 150 cm in wingspan. It is a massive bird and aggressive hunter, but also bully, pirate and scavenger - one of my books describe them as 'kleptoparasitic', aggressively robbing other seabirds (ducks, cormorants) of their prey. It sports a very dark, almost black mantle and pinkish legs. Juvenile, probably a second summer, presented on pic N° 4 - like other two large gulls observed in Brittany, L. marinus goes through four age groups, becoming a full adult by its fourth year.

We observed it mainly on rocky shores and sandy beaches on Atlantic coast and rocky islands, and only rarely close to settlements, and most often in mixed flocks with other gulls.

When we changed our holiday plans and decided to go and visit Brittany, one of my hopes was to learn more about gulls, terns and Laridae family; and see some species I have never encountered before... As it came out, in my opinion, Brittany is a perfect spot for that - there are 33 species belonging to Laridae family registered, 19 of them regular. Even though we missed Kittiwakes and many ternes, we enjoyed discovering Greater and Lesser black backed; Herring and Mediterranean gulls, ternes..