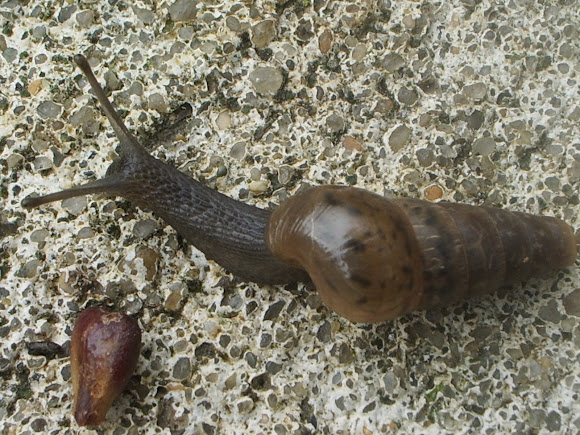 The shell of the decollate snail is long and roughly cone-shaped. It grows to approximately 40 mm in length, and upon reaching mature size, grinds or chips off the end of its own shell by moving its body roughly against hard surfaces, so that the shell takes on a decollate shape, tapering to a blunt end.

This species is native to the Mediterranean excluding south-east Mediterranean. It is introduced in Israel and in Egypt.since Roman times.It has been introduced into North America, including Phoenix and Glendale, Arizona, and other areas as a biological control agent, in hopes of controlling populations of the brown garden snail. Great Britain, as a "hothouse alien"

Thanks Manval for one more ID

thanks Emma,this one i spoted a few years ago in my sister in law in faro algarve,it's the extreme south of portugal,very warm,very diferent from braga,even the snail are diferent