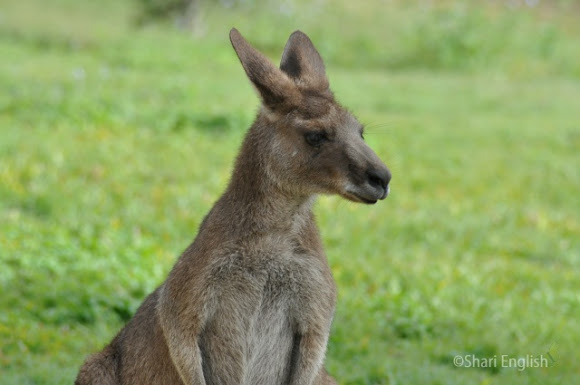 A large robust marsupial with soft grey fur, varies from silver grey to dark grey-brown with a paler underbelly. The paws, feet and tail tip are dark grey to black. They are predominantly nocturnal, sheltering in shade during the day and feeding from late afternoon to early morning. They often live in groups of 10 or more. Eastern Grey Kangaroos can live up to 25 years in the wild.

Open forests and woodlands with a grassy under storey, roadside verges, paddocks, grassland, parkland and also a common site on many golf courses. Common along most of eastern Australia including Tasmania.

This female and her male joey are regulars in my backyard and have become quite used to us. I have been able to watch the joey grow from a pouch young to almost as big as his mum. They enjoy eating the fresh green grass around the house and drinking out of a large water dish I have put out.

no worries, they are lovely to watch just doing their thing in the wild the joeys have so much character!

Thanks for sharing, very nice!