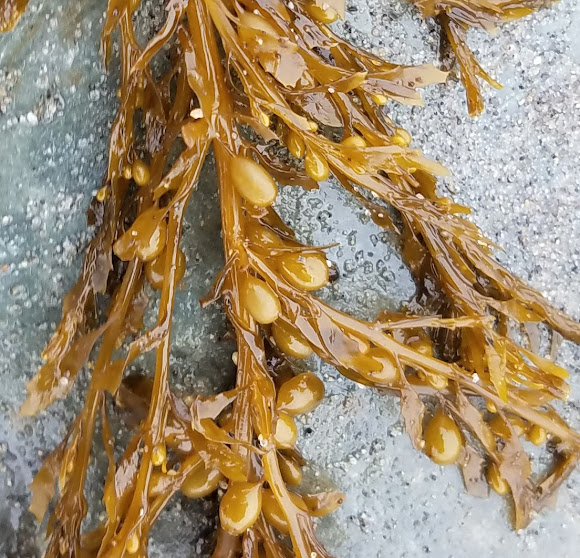 Sargassum muticum is a large, yellowish-brown or olive-brown seaweed that can be distinguished from most other Pacific coast seaweeds by its small, spherical float bladders. It grows on rocks, shells or other hard objects, attached by a stout, spongy holdfast. The lowest part of the stalk just above the holdfast is sometimes divided into a few main stems, and gives off several flat, blade-like leaves up to 10 cm long. Above that, the main stems branch repeatedly to form a bushy plant that is often 1-2 m long, with a maximum length of about 10 m. The branches bear small leaves, club-shaped reproductive bodies, and the spherical float bladders. The leaves are up to 2 cm long and either smooth-edged or toothed (the latter resembling small holly leaves).

Sargassum muticum is an invasive seaweed species that can displace native seaweed. Now ranges along the west coast of North America and much of Europe's coast.