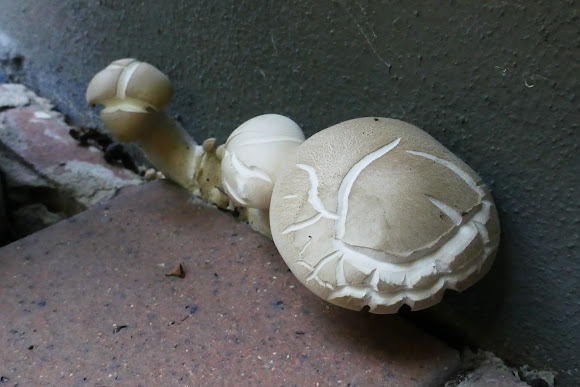 An unusual mushroom species that I've never encountered before. Initially I thought these were puffballs, but upon closer inspection found they had stems, and despite having a soft and spongy appearance, were quite hard and brittle with roughly the same weight and consistency as dense cork. Specimens of various sizes all had rounded caps, the largest of which were deeply split revealing the white inner flesh. Surface was otherwise smooth with a slightly "leathery" appearance. Smooth, involuted margins and free, wavy gills. Stipes were thick and smooth with no ring. Largest mushroom approx. 6 cms in diameter.

Found growing in a small crack between a concrete wall and a brick path. Directly beneath a downpipe which perhaps affords some moisture, along with whatever is found amongst the cracks. Well-shaded area due to dense tree foliage. Native golden penda trees above, plus a nearby poinciana. Couch grass other side of pathway.

18 May, 2019 - species ID found. Thanks to the Facebook "Australia & New Zealand Fungus Identification" group admins. It's an edible, commercially grown species that's native to Sri Lanka, India (Kerala), Thailand and Malaysia. Both links provide a detailed description of this fungus.

They certainly are mushrooms, but not the sort that I was expecting. I haven't been able to identify the species yet, but I'll keep searching. They are very unusual, particularly with the splitting caps.

Thanks, Brian. I guess I take the coins for granted. Mushroom hunters here always say "5 cent coin with echidna facing up!", but I can have a pocket full of coin and not have a 5 cent piece. My recent yellow jelly fungus spotting shows our 2 dollar coin. It would be about the same size as your dime. See, I didn't have 5 cents!

Awesome find Neil! The coin is as cool as the mushrooms!