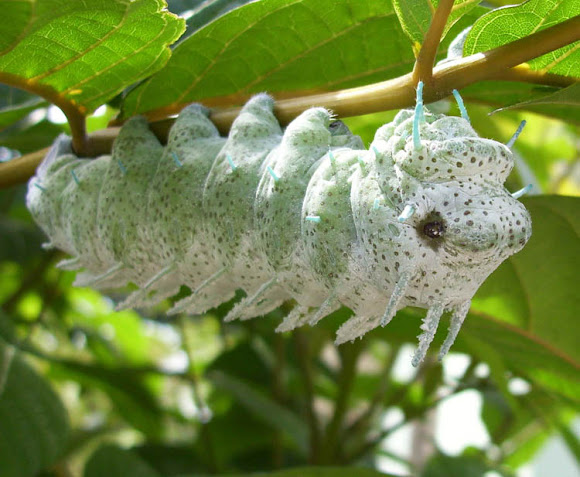 Attacus atlas is family Saturniidae is the biggest moth in south east Asia or may be in the world. The color is yellow to brown. The expanse of wings is about 20-25cm. the female is much larger than the male. The male's antennae are larger than the female's. Wings have spots like eyes; wings color are grey, orange, brown reddish. Feathery antennae; male is bigger than female. Larvae is big with thorns/hairs. Build cocoon (chrysalis) from saliva liquid that contain of sticky substance. Cocoon is hanged on the twig, leave, bush, or among the leaves on the ground. Adult female which just come out from the cocoon will release a liquid (pheromone/smell) to attract male. Giant butterfly has weak flight. At the previous time people used the cocoon to make thread.

it is on endangered status

thamks for the correction @ Diane and Leane

Great spot UrifahRidlo! I'd like to make a correction though in the description that it is a moth and not a butterfly.

Wow, its nice you still find it in Malang. I never saw it alive in last 5 years.
Where you find it? In kota or kabupaten Malang?
Last time I see it, I found it already dead, stomped by someone in RSSA. :(
In what tree you find the caterpillar?

@ 8BitFinch
@ Ava T-B
thanks, and I still need assistance in this Project

I appreciate that you put pictures of both life stages. Welcome to Project Noah.

@ KarenL thank you
@ Little Rex, yeah it is a bitter fact
@ Brandon I did aditting the mision, thanks for guidance, coz I am new here
@ lgCostaNut, you are welcome
@ KhairinSaili thanks

Beautiful. Thanks for sharing this wonderful speciman!

Absolutely an amazing spotting!!! :-D welcome to Project Noah!!! You should add this one to the missions, butterflies and moths of the world, as well as best wildlife photograph, and the color red mission. :-D

oooh...! I love its larval stage! It looks so cool, and freaky ;) This is a great spot, lucky you found one! :D

too bad it's endangered though :(