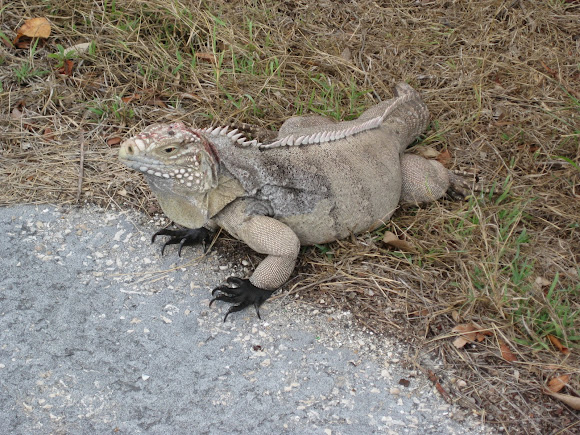 This large lizard, grey-brown with black markings, has red eyes and a row of spines which run from the back of the head to the tip of the tail. The male is larger than the female and has substantial jaw muscles giving it a very strong bite! They are, however, vegetarian, foraging for fruits, flowers and leaves. Iguanas never stop growing, although the growth rate does slow down with age. Adults of five feet in length from nose to tail are not uncommon. They are not sociable creatures and tend to live alone, not encouraging others to stay in their chosen area. When feeling threatened, iguanas turn themselves sideways to the foe, draw themselves up as high as possible on their four legs and flatten their bodies laterally so that the area they expose to their opponent is as large as possible. Fierce fights do occur, especially during mating season amongst males who are aggressive from a very early age.

These iguanas are all over Little Cayman Island. We saw ones of all different sizes, but definitely some big guys. They loved lettuce and even ate it out of our hands.