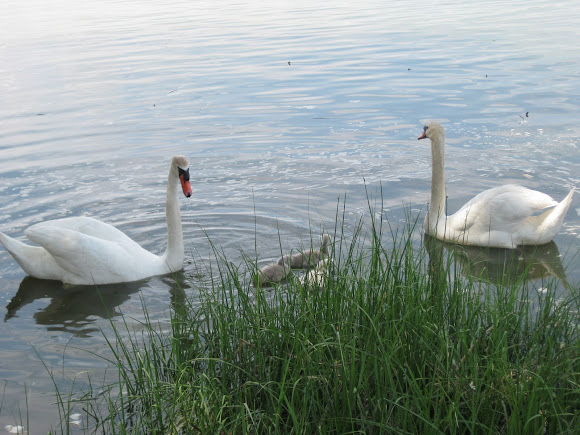 The swans are the largest members of the duck family Anatidae, and are among the largest flying birds. The largest species, including the mute swan, trumpeter swan, and whooper swan, can reach length of over 1.5 m (60 inches) and weigh over 15 kg (33 pounds). Their wingspans can be almost 3 m (10 ft). Compared to the closely related geese they are much larger in size and have proportionally larger feet and necks. They also have a patch of unfeathered skin between the eyes and bill in adults. The sexes are alike in plumage, but males are generally bigger and heavier than females. The Northern Hemisphere species of swan have pure white plumage but the Southern Hemisphere species are mixed black and white. The Australian Black Swan (Cygnus atratus) is completely black except for the white flight feathers on its wings; the chicks of black swans are light grey in colour, and the South American Black-necked Swan has a black neck. The legs of swans are normally a dark blackish grey colour, except for the two South American species, which have pink legs. Bill colour varies: the four subarctic species have black bills with varying amounts of yellow, and all the others are patterned red and black. Although most birds generally do not have teeth, swans are known to be an exception to this, having small jagged 'teeth' as part of their beaks used for catching and eating fish. The Mute Swan and Black-necked Swan have a lump at the base of the bill on the upper mandible.

The swans are generally found in temperate environments, rarely occurring in the tropics. A group of swans is called a bevy or a wedge in flight. Four (or five) species occur in the Northern Hemisphere, one species is found in Australia and New Zealand and one species is distributed in southern South America. They are absent from tropical Asia, Central America, northern South America and the entirety of Africa. One species, the Mute Swan, has been introduced to North America, Australia and New Zealand.

These swans live in the cove outside my parents' beach house. They sometimes eat out of my mom's hands. I have seen them brutally kill a mallard duck who came too close to their babies. (We couldn't reach them to stop the killing).