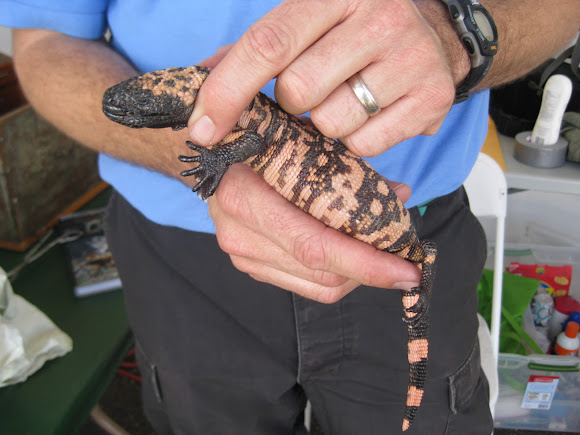 The Gila monster (Heloderma suspectum, play /ˈhiːlə/ hee-lə) is a species of venomous lizard native to the southwestern United States and northwestern Mexican state of Sonora. A heavy, slow-moving lizard, up to 60 cm (2.0 ft) long, the Gila monster is the only venomous lizard native to the United States and one of only two known species of venomous lizards in North America, the other being its close relative, the Mexican beaded lizard (H. horridum). Though the Gila monster is venomous, its sluggish nature means that it represents little threat to humans. However, it has earned a fearsome reputation and is sometimes killed despite being protected by state law in Arizona and Nevada.

The Gila monster is found in the Southwestern United States and Mexico, a range entailing Sonora, Arizona, parts of California, Nevada, Utah, and New Mexico (but not Baja California). They inhabit scrubland, succulent desert, and oak woodland, seeking shelter in burrows, thickets, and under rocks in locations with ready access to moisture. In fact, Gila monsters seem to like water and can be observed immersing themselves in puddles of water after a summer rain. They avoid living in open areas such as flats and farmland.

Spotted at a booth at the Saguaro National Park & National Geographic BioBlitz event.